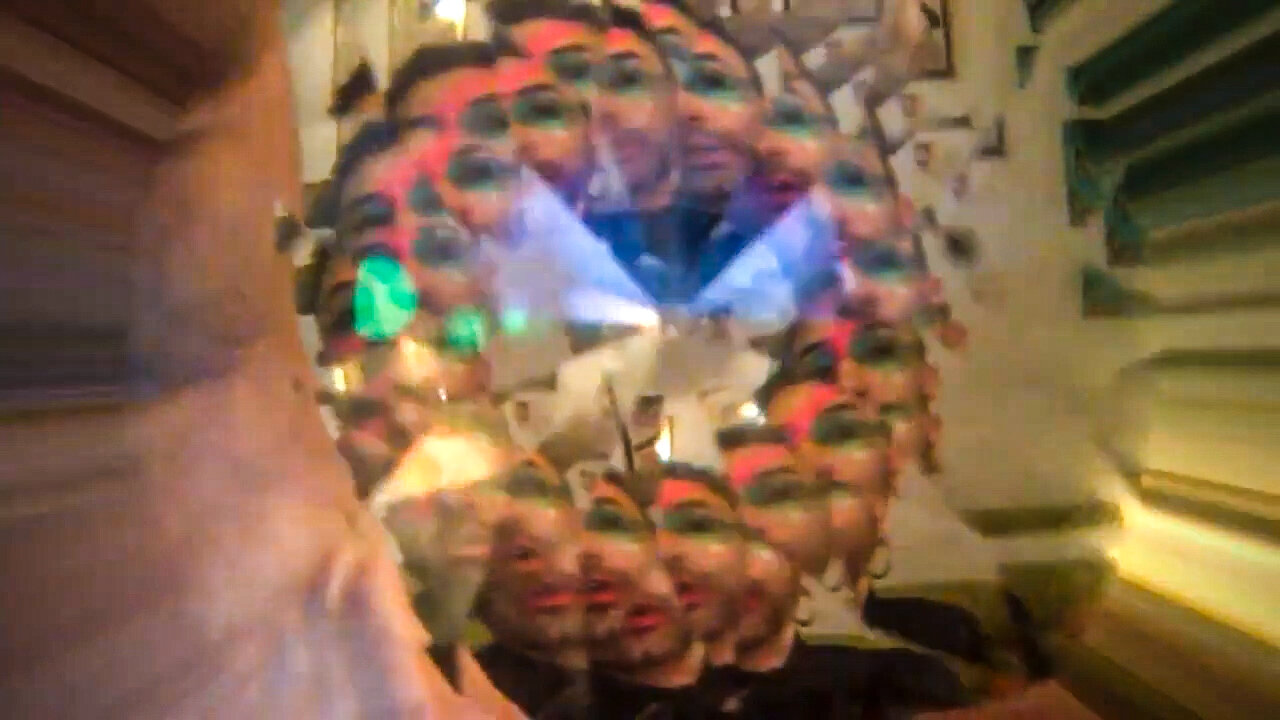 Delaney McDonough (Projection Design) is a performer, producer, and designer based in Brooklyn, NY. Their work has been produced primarily in New York, San Francisco, and throughout New England. Delaney serves as production manager for experimental dance and performance festivals including Performance Mix Festival (NY), FRESH Festival (CA), and Lion’s Jaw (MA).

Kristin McWharter is an artist whose practice uses multidisciplinary approaches to interrogate the relationship between competition and intimacy. She often integrates novel technologies and unexpected material forms to conjoin viewers within immersive sculptural installations and viewer- inclusive performances. Her work imagines new and alternative forms of social behaviors and relationships. Inspired by 20th century sports narrative, collective decision making, and technology as a contemporary spiritual authority. Blurring the boundaries of social intimacy and hype culture the work challenges viewer’s relationships to affection and antagonism within the larger social context. Her work has been exhibited widely including at The Hammer Museum, Walt Disney Concert Hall, Bangkok Arts and Cultural Center, Ars Electronica in Linz, Austria, Museo Altillo Beni in Santa Cruz de la Sierra, Bolivia, and FILE Festival in Sao Paulo, Brazil. McWharter is an Assistant Professor in Art & Technology Studies at SAIC and received her MFA from UCLA in Design Media Arts. She teaches courses in experimental media, experimental game design, and virtual reality.

Mur is a New York City–based visual and performance artist with a focus in music composition. He has exhibited and performed solo works in collaboration with La MaMa, National Sawdust, Le Poisson Rouge, Justin Vivian Bond, Alan Cumming, Jill Platner, The Wild Project, Illesteva, Creatures of Comfort, Susan Alexandra, Nordstrom, and Soho House. His debut musical, Vagina Town opened Off-Broadway in 2017 with glowing reviews and quickly developed a cult following. Vagina Town, inspired by the women’s movement , has been performed through out New York City and recently released an Original Off-Broadway Cast Recording. Mur’s visual work is on display at The Wild Bird Fund where he is the artist in residence. Follow him at @murnewyork

Matt Romein is an artist and performer based in Brooklyn, NY. His artistic work inhabits the intersection of live performance, generative computer art, and multi-media installation. He has worked in NYC’s downtown performance community as a sound and video designer while also making his own technology-centric live performances. His design work includes plural (love) by Haruna Lee + Jen Goma, Knot in My Name by Ita Segev, King by Neal Medlyn, and [50/50] old school animation by Peter Mills Weiss + Julia Mounsey. His design and performance work has been shown at BAM, Mana Contemporary, Soho Rep, The Public Theater, 3LD Art + Technology Center, and more. A self-taught coder, he has developed and designed large scale visual and interactive installations that have been shown at Sundance’s New Frontier Program in Park City, Utah, IDFA’s Doclab in Amsterdam, and SXSW in Austin, Texas, among others. He has had artist residencies and received grants from Pioneer Works, Google, CultureHub, Signal Culture, NYU, and more. He is currently a Research Fellow at NYU’s ITP, a masters program focused on creative uses of art and technology, where he leads a research group exploring new techniques for virtual performance and teaches as an adjunct professor.

Stacey Karen Robinson is a multidisciplinary theater artist. She performed her solo work, You Never Can Always Sometimes Tell, at JACK (NYC) & Salvage Vanguard Theater (TX). The show was developed with support from the Lower Manhattan Cultural Council and the Foundation of Contemporary Arts. She’s a recipient of an Art Matters Grant (2019) and a BRIO Award for Playwriting (2009). Her previous monodrama, Quiet Frenzy, is published in solo / black / woman: scripts, interviews, and essays, Northwestern University Press, 2014.

Or Schraiber was born in 1992 in the city of Jerusalem, where he studied at the ‘Jerusalem Academy of Music and Dance’. In 2010 Or joined the Batsheva Dance Company which whom he danced for seven years. In parallel to his time in the company, he served at the IDF for three years. In 2017, Or moved to New York City. Studied at the Stella Adler Studio for Acting. In 2019, he starred in and co-choreographed Boaz Yakin’s feature film ‘AVIVA.’ Later that year, Played ‘Thaddeus’ in Terrence Malick’s ‘The Last Planet’; the same year he joined the National Tour of the 10 Tony-awards Broadway production ‘The Band’s Visit’, playing the role of ‘Zelger’. Or is a core member of AMOC (American Modern Opera Company). As a certified gaga teacher, Taught in Institutions such as Juilliard, Princeton, Suny Purchase, etc… Or has choreographed, and appeared in numerous music videos and short films including collaborations with Netta Barzilai, Celia Rowlson-Hall, Jose Padilha, and Yemen Blues. Or wrote and directed two Immersive shows commissioned by the TLV municipality (‘We are TUTU’, and ‘YYY’). He wrote and directed various short dance films that were presented by festivals all over the world.

Bobbi Jene Smith is an alumnus of The Julliard School, North Carolina School of the Arts, and the Royal Winnipeg Ballet School, she is a founding member of the American Modern Opera Company (AMOC), and a former member of Batsheva Dance Company under the artistic direction of Ohad Naharin. Her choreography has been presented by The Batsheva Dance Company, La MaMa, Martha Graham Dance Company,PS122 COIL Festival, A.R.T., The Israel Museum, UNC Chapel Hill, and CORPUS of The Royal Danish Ballet among others. Film work includes the choreography for “Annihilation” directed by Alex Garland, and choreographing and starring in Boaz Yakin’s “Aviva.” She is the subject of “Bobbi Jene,” winner of the awards for Best Documentary, Best Cinematography, and Best Editing at the 2017 Tribeca Film Festival. She is the the recipient of The Harkness Promise Award and was The Martha Duffy Resident Artist at Baryshnikov Art Center in 2019. She is part-time faculty at The Julliard School and is a guest teacher at NYU and UArts.