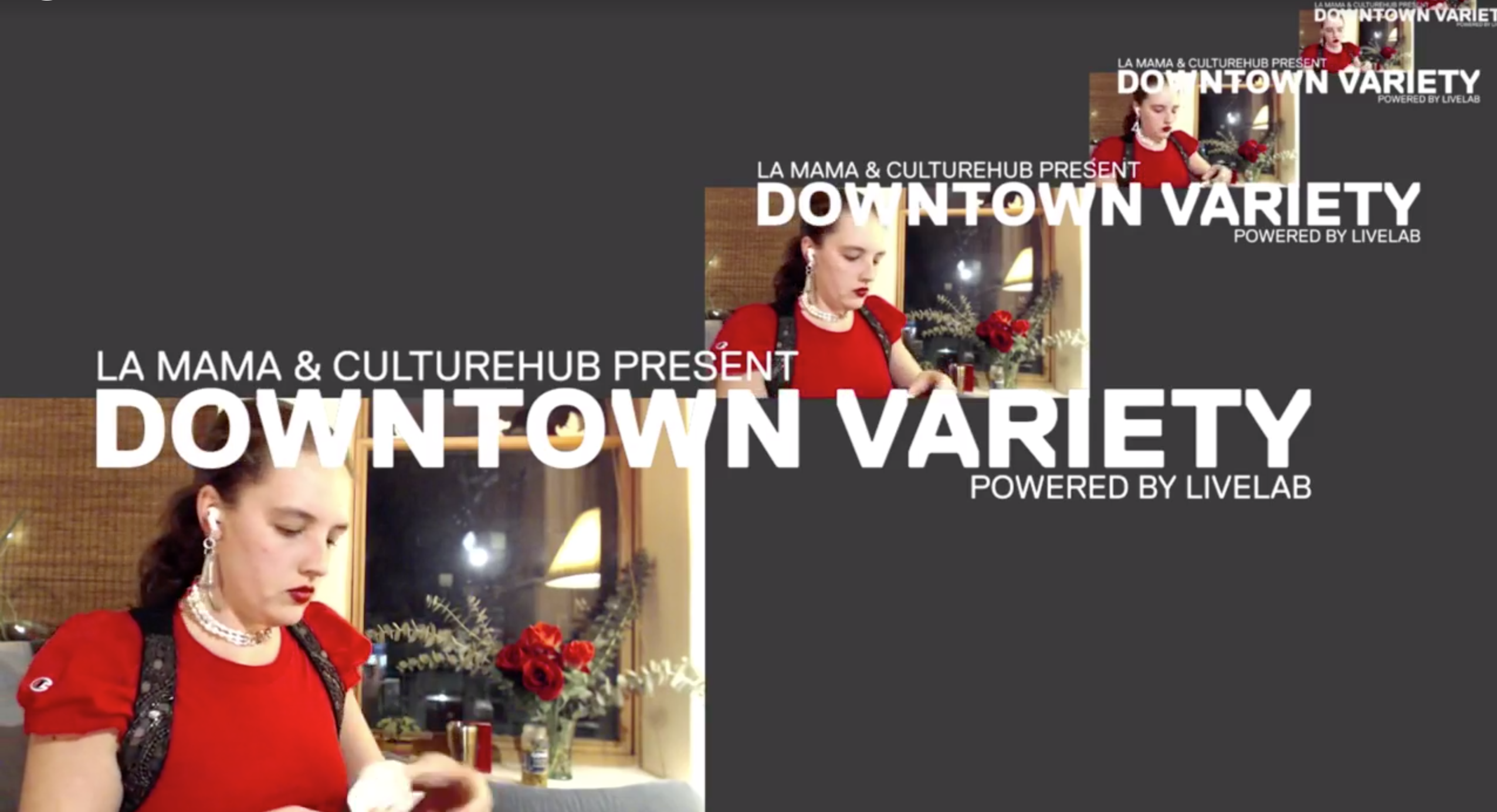 Powered by LiveLab, a browser-based media-router for collaborative performance by CultureHub.

Nao Bustamante’s precarious practice encompasses performance art, video installation, filmmaking, sculpture and writing. Bustamante has presented in Galleries, Museums, Universities and underground sites around the world. In 2020 Bustamante’s forthcoming 360º film, “The Wooden People” received a producing grant from the Mike Kelley Foundation and will be presented at REDCAT in 2021. Bustamante is alum of the San Francisco Art Institute, and in 2020 she was awarded an honorary doctorate degree from her alma mater. She is a Professor at the USC Roski School of Art and Design. There, she also serves as the Director of the MFA in Art.

Originally from Ft. Lauderdale, Florida, Shauna Davis is in a serious & playful relationship with movement. She is a freelance dancer and choreographer based in LA performing in both the commercial/film + concert dance realms. Her works have been performed at the Dallas DanceFest and Harvest Chicago Contemporary Dance Festival and she has set work at Avant Chamber Ballet and Dallas Black Dance Theatre: Encore! 2020 has awakened a serious urgency within her to share dance and create worlds through movement. She is pumped to be a Resident Artist with La MaMa for the 2020-2021 season. www.shaunadavisdance.com

Aaron Samuel Davis is a human who dances currently creating content based in Germany. His work and research explores  themes such as: human behavior, storytelling, history rewritten or reimagined, and the relationship between interdisciplinary arts. Davis enjoys learning new languages and constructing new knowledge. He choreographs in hopes to stay curious and open for what is yet to come. He is grateful for the opportunity to share work again through the Downtown Variety platform!

Dane Terry is a multi-media storymaker, performer and composer. He has made stories and music for all sorts of rooms. He has been up to this for quite some time and intends to stay up to it. Dane is the writer, composer and lead performer of the Music Fiction podcast Dreamboy. Works for stage include: Jupiter’s Lifeless Moons (PSNY 2018) and Bird In The House (La MaMa 2015, Under The Radar Festival 2016). Dane was the 2016 recipient of the Ethyl Eichelberger Award from PSNY.

Amphibian Stage was founded in Fort Worth, Texas in 2000 with a mission to produce innovative and engaging theatre that inspires new ideas, opens new doors, and increases our understanding of the vast world around us. Now in its twenty-first season, Amphibian has produced numerous groundbreaking and challenging plays (some regional premieres, others US or world premieres) that foster a deeper understanding of ourselves as members of the global community. The company is widely recognized as a place where exciting new work is developed, brought to life, and launched to other stages across the country and beyond. Plays that have premiered at Amphibian include Bank Job by John Kolvenbach, La Llorona by Kathleen Culebro, Cyrano by Jason O’Connell, The Quixotic Days and Errant Nights of the Knight Errant, Don Quixote de la Mancha by Brenda Withers, The Trap by Kieran Lynn, to name just a few. Committed to nurturing young and diverse audiences, Amphibian has developed a strong internship program, and a dynamic outreach project, Tad-Poles, that brings stilt dance training to children and adults as a tool for increasing confidence, building coordination and physical fitness, and connecting students and spectators to the many countries where stilt dance is traditionally practiced. is steadily increasing the company’s visibility and following. New to Amphibian in 2018 is a multi-faceted outreach program designed for veterans of the US armed forces. The program includes workshops, special performances, and discounted tickets.