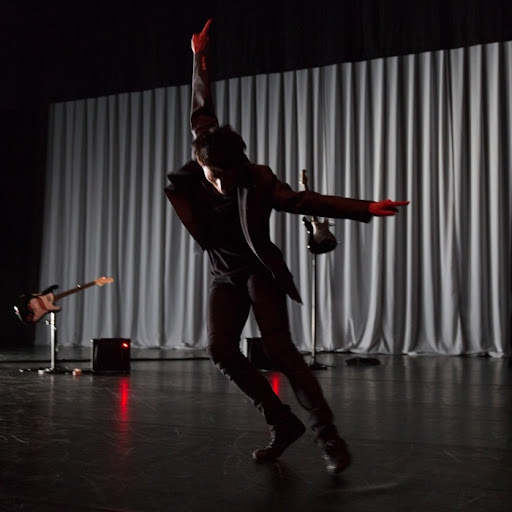 The third part of a triptych that began with a solo piece about the problem of identity building, Double Jack sets a challenge for performers: how, in spite of belonging to the gender, to re-incorporate man’s body language that is engraved in the clichés of power as much as in its faults. On the set, an interactive sound installation composed of five electric guitars reacts instantaneously to the movements of the dancer. They become the chiefs of an army of electric strings and, through their movements, set off musical loops that gradually move within the scenic space. The composition relies upon a base of three chords taken from rock ’n’ roll standards, which are configured like echoes of the gesture that is danced.

In 2002, he joined Catherine Diverrès’ company and has never stopped working with her, both as a dancer and as a video maker on her projects. He had also been performing for Boris Charmatz since 2009 and Olivier Dubois since 2012.

In 2006, he created a first W.H.O. solo piece, an auto fiction that evokes the path of his own adolescent identity building. This piece, which also addresses questions of transvestism, gender and sexuality, was the first part of a triptych on questions of gender and male sexuality.

In 2009, he benefited from a “CulturesFrance Hors les murs” (Villa Médicis) program grant for a research project in New York looking at the escort business. In New York, using filmed interviews, he met ten escorts and, on his return, created a choreographic piece and video installation with these materials. This double-faceted project, entitled Men at work, Go Slow!, was the second part of the triptych that began with W.H.O. in 2006, the third being the Double Jack project.