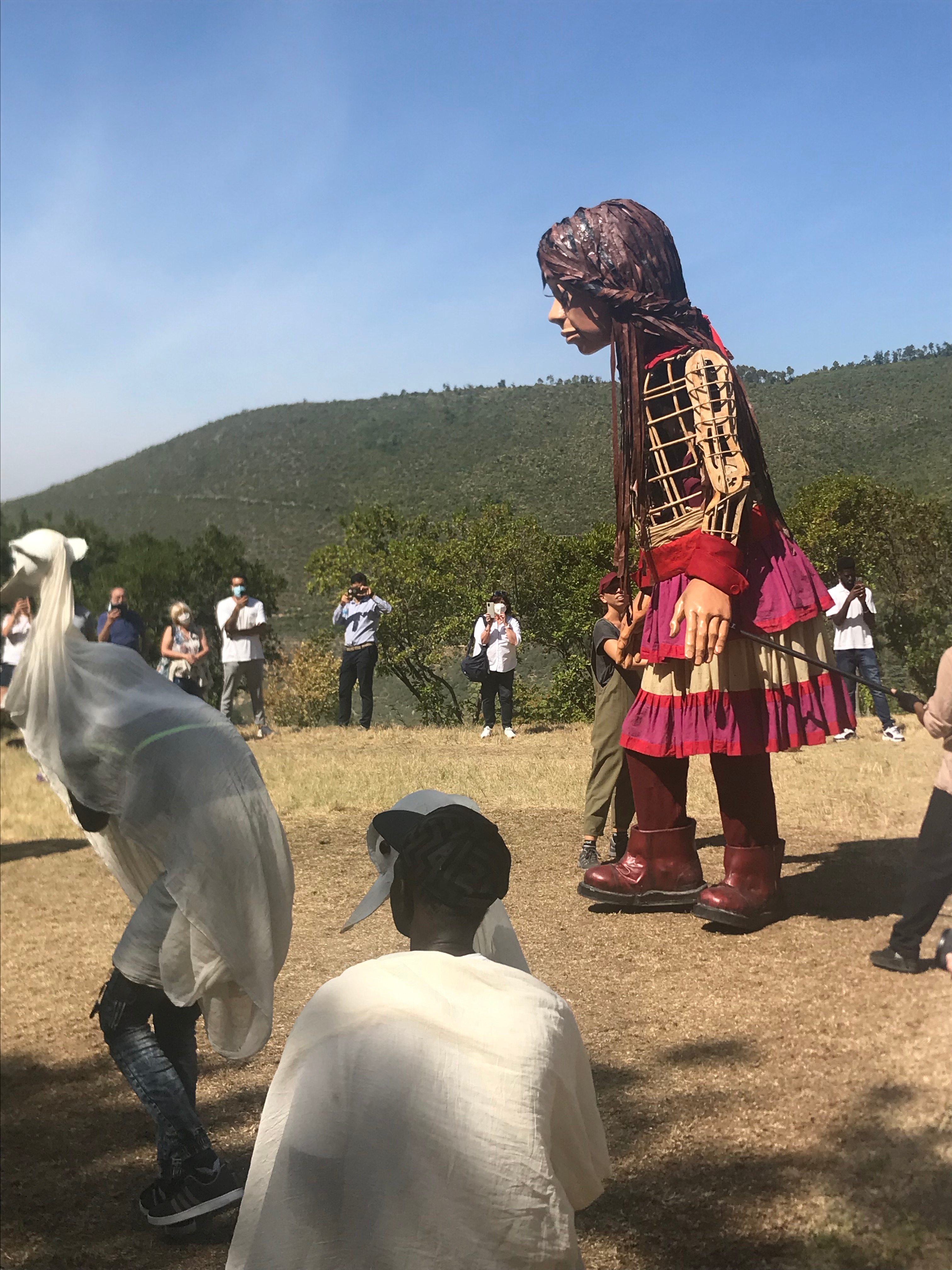 During the two-week Program, directors will take workshops with 4 distinguished, internationally renowned directors, visit Spoleto and other Umbrian cultural sites. Accommodation, meals and local transport are included in the fee.

For details of the Workshops being offered and bios of the Master Artists, please click on the Credits tab above.

Watch this Space for More Master Artists To Be Announced

A training program for professional directors, choreographers, actors and others. Internationally renowned theatre artists conduct workshops and lecture/demonstrations. During the Symposium, participants will travel to Umbrian towns such as Orvieto, Perugia  or Assisi to get a taste of Umbrian art and culture. Performances at local arts festivals and community fairs are also included.  In addition, participating directors may conduct their own workshops to share insights and techniques with their colleagues.

Participants will be exposed to a variety of theatrical perspectives during the Symposium, from instructors who will expand their sense of what is possible in the theatre. Directors attending the Symposium see how prominent artists on the international scene create their unique productions. The workshops are participatory, and it is expected that all attendees will engage actively in the processes of the various teaching artists.

EXCURSIONS: While most of the time will be spent in workshops at La MaMa Umbria, at least one day has been set aside for excursions to nearby cities. We will attend at least one performance event at a local arts festival. There may also be opportunities to see additional performances on an ad hoc basis. The group will visit nearby towns such as Perugia, Umbria’s capital, Deruta, famous for ceramics painted by hand or Assisi, to see the famous Cathedral of St. Francis, Orvieto, etc. In addition, we will share an Italian tradition, a sagra, or community celebration of the specialties produced by small Umbrian villages (such as truffles, olive oil and wine.)

EXTRA WORKSHOPS: In addition to our internationally renowned guest teaching artists, there will be an opportunity for you and your colleagues to share exercises and techniques with each other in late night sessions. You may propose a special workshop to offer in one of the late (after dinner) sessions. Use the space on the registration form to describe what you would share. Not all proposals will be accepted based on time and space availability.

CREDIT: The La MaMa International Symposium is accredited through Sarah Lawrence College. While the Symposium is geared for working professionals, some slots may be filled by university students, who may get credit (2 credits for one session of the Symposium and 1 credit for the Retreat) for their participation through an arrangement with Sarah Lawrence College. For more information, please contact La MaMa at (212) 254-6468.

APPLICATION & FEE: Space is limited. Please fill out the Online Registration Form. Registrants will be accepted on a first-come, first-served basis, provided they are accepted into the Program. Registrants must fill out the Registration Form and forward a recent resume. The fee is US $2,900. Space is secured with a deposit of $1,000 due with the registration form by May 15, 2022. $100 of the deposit is a non-refundable processing fee (unless the Symposium is already full when we receive your registration.)

Many of our international artists cannot afford to make the trip to Umbria. On our 23rd anniversary, we are offering scholarships to disadvantaged artists from countries that have had little to no representation in our residency programs. It costs approximately $5,000 for the entire trip, which includes admission fee, accommodation, meals, workshops, and international travel for one participant. All donations will help us achieve this goal.

Emily will share her visionary directing practice focused on creating documentary theater. Her ground-breaking work in this area is exemplified by her award-winning productions of Execution of Justice, Still Life, Having OurSay, Gloria: A Life, and others. We will learn from her experience directing and writing documentary plays. In the workshop, participants will create short documentary pieces and direct them.

﻿Emily Mann, “rebel artist of the American theatre” is a Tony nominated playwright and director and a Tony Award winning Artistic Director, having led McCarter Theatre Center for 30 years where she directed over 50 productions both in the classic repertoire and the premieres of 20 new plays including those by Ntozake Shange, Anna Deveare Smith, Nilo Cruz and Danai Gurira. She has been inducted into the American Theater Hall of Fame.

Carving Light out of Darkness

“We will explore the true meaning of art in our lives and its off-text ability to thrive. On this path travelled called life, I found art to be a great walking stick defining our innermost encounters with self. It is thes ame art that has become the undying flame from within empowering us with a resilient spirit that constantly strikes and curves light in darkness. Art has been the greatest companion in the most unknown time and space we currently live in.”

Hope Azeda was raised as a refugee in Uganda and returned to Rwanda after finishing her theatre studies at Makerere University. She is one of the leading figures in contemporary Rwandan theatre. As the founder and artistic director of Mashirika Performing Arts and Media Company, a leading theatre company in Rwanda since 1997. Hope has been involved with 77 productions including Africa’s Hope which was performed in Kigaliat the 10th anniversary commemoration of the genocide. She has been an artist-in-residence at the Institute for the Arts and Civic Dialogue in Cambridge-Massachusetts, an alumni of Brown University International Advanced Research Institute. Ms Azeda is curator of Ubumuntu Arts Festival.

Story-weaving was developed by Spiderwoman Theater, soon after they were founded by Murielle’s female relatives in 1976. Spiderwoman Theater broke new ground in using storytelling and story-weaving as the basis for the creation of their theatrical pieces, which addressed issues of sexism, racism, classism, and the violence in women’s lives. The performers wrote and performed personal and traditional stories. The director served as the “outside eye,” and the stories were organically layered forming a mosaic with movement, text, sound, music and visual images. The workshop involves directors learning about this practice and developing their own pieces.

Murielle Borst-Tarrant (Kuna/Rappahannock Nations) is an author, playwright, director, producer, cultural artist, educator, and human rights activist. Murielle began working as an artist early in her life with Spiderwoman Theater. After attending Long Island University, she began combining Native American myth and creation stories to help compose a subgenre of literature referred to as Indigenous Fantasy. She is the author of the book series The Star Medicine and short stories published by Miami University Press.

She is the Artist Director of Safe Harbor Indigenous Collective. She has produced, wrote, and directed Don’t Feed the Indians- A Divine Comedy Pageant! which premiered at La MaMa in 2017. She works on the deconstructing the pedagogy of the arts within Native communities in the NYC education system. Nominated for the Rockefeller grant in 2001, she won a Native Heart Award. She served as the Special Assistant to the North American Regional representative to the United Nations Permanent Forum on Indigenous Issues. Global Indigenous Woman’s Caucus Chair (North America) in 2013 to May of 2014. She has spoken at the Indigenous Women’s Symposium at Trent University, at the International Conference at the Muthesius Academy of Art in Kiel Germany, and the Norwegian Theater Academy.

Trees From Below: Theatre and the Environment

I have an interest to work about nature and more specifically about the performativity of the vertical gaze. Could landscape become theatre? Is it possible to have a relationship with “natural” spaces without exploiting their resources or passing through them as tourists? What if art did not imitate nature, but allowed us to experience it? The environment is becoming an increasingly central issue in terms of food, resources, health and the pace of life: Our generation tries to find a new relationship to what we perceive as nature. But although many contemporary artists address these issues, production and presentation venues remain mostly urban and closed. This workshop will leave these spaces and try to give an ephemeral response to land art - by means of theatre. It does not propose to transform the landscape through architectural interventions, but rather to pay collective attention to this form that is a mixture of nature and civilization, to devote time to it, to look at the territory with a gaze that is different from that of those who plan it. To change perspectives and develop forms of participatory spectatorship to reframe the non-human.

Stefan Kaegi creates documentary theatre plays, audio-interventions, curated formats and works in the urban environment in a diverse variety of collaborative partnerships. Using research, public auditions and conceptual processes, he often gives voice to '‘experts' who are not trained actors but have something to tell. Most of his works are released under the label „Rimini Protokoll“ - name of the Berlin-based theatre collective he founded together with Helgard Haug and Daniel Wetzel in the beginning of the millenium.

In 2005, Kaegi won the jury-prize of the festival “Politik im Freien Theater” for Mnemopark. 2010 Kaegi was awarded the European Prize for Cultural Diversity. In 2011 the jury prize for “Radio Muezzin” in the Theatre Festival Sarajevo, and hei curated the "idiom" section of "Malta" Festival Póznan. 2015 Remote Moscow was nominated for the Golden Mask in Russia. And in 2018 he won the Grand Prize of Bitef Festival Belgrade for “Nachlass”.

Kaegi co-produces works with Helgard Haug and Daniel Wetzel, under the label “Rimini Protokoll”. Rimini Protokoll's purpose is to pry apart the sense of reality and present all its facets from unusual perspectives. In 2007, Rimini Protokoll was awarded with the Faust Theatre Prize. In 2008 it received the European prize “New Realities in Theatre”, and in 2011 the Silver Lion at the Venice Biennale for performing arts. Both “Call Cutta
in a Box” and the “Weltklimakonferenz” got a honorary mention by the jury of Ars Electronica. The multi-player video-installation "Situation Rooms" about the weapon-industry got the Excelence award of the 17th Japan Media Festival in 2013. And in 2015 Stefan Kaegi and Rimini Protokoll got the Grand Prix Theater/Hans-Reinhart-Ring.