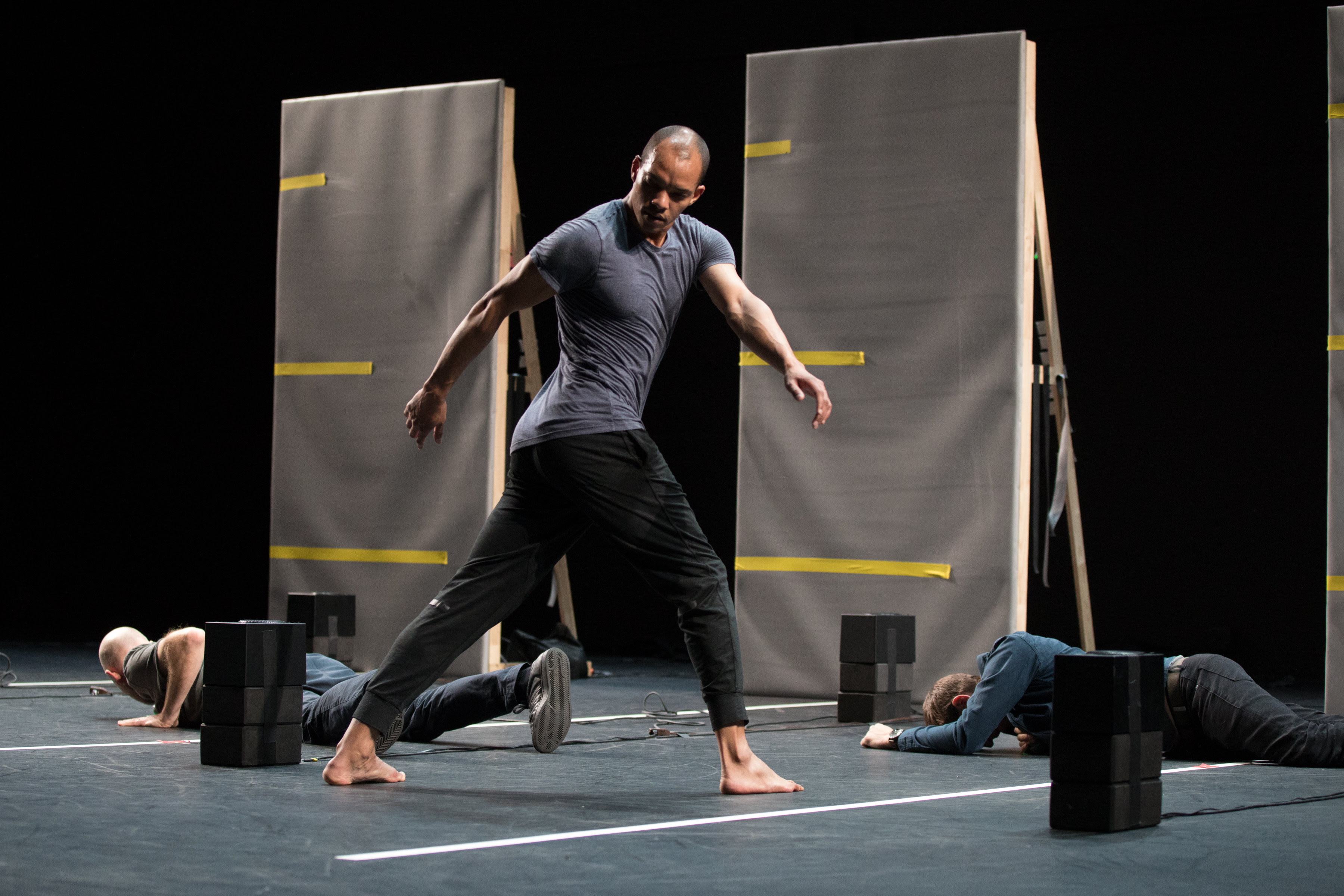 Construction is a collaboration between Susan Marshall and Sō Percussion. In it, music and dance are two separate systems that coexist in a symbiotic and, at times, conflicted relationship. The four percussionists' instruments are unconventionally employed microphones and amplifiers that play according to a shifting visual score that determines both the music and the musicians' trajectories through space.  Three dancers, driven by a different set of choreographic rules, vie for space with the musicians.

Susan Marshall choreographs metaphoric worlds that often dwell at the intersection of several disciplines. Her work employs details of touch, initiation and gaze to explore the complexities of behavioral systems and of interpersonal relationships and patterns. The resulting dances are often densely woven, recursive, human in scale and speak to the negotiations of intimacy and questions of control, power, dependency and intention.

Marshall’s recent dance-making has been driven by her collaborations with peer artists in other media. This has led to discipline-crossing work created collaboratively with visual artists Martha Friedman and Suzanne Bocanegra, composers David Lang and Jason Treuting, and music ensembles Sō Percussion and Dither.

“Dancing with and around Neurological Motor Challenges – an Interdisciplinary Working Group,” is a new collaboration with neuroscientist Sabine Kastner, engineer Naomi Leonard, and historian Brian Herrera. The group’s aim is to create tools or environments that are useful to people whose neurology makes motor tasks – and daily life-- difficult.

The New York-based dance group Susan Marshall & Company has performed in theaters throughout the United States, Europe and Japan since 1985 with recent performances in NYC at Brooklyn Academy of Music, The Kitchen, New York Live Arts, Baryshnikov Arts Center, and Andrea Rosen Gallery, and nationally at venues such as the Kennedy Center, the Center for the Art of Performance at UCLA, the Krannert Center, Gammage at Arizona State University, and Montclair State University.

Beside the MacArthur, awards include a Guggenheim Fellowship, and three New York Dance and Performance Awards (BESSIES.)  Marshall has created dances for the Lyon Opera Ballet, Frankfurt Ballet, and Mikhail Baryshnikov. Her work has been in the repertory of a range of dance companies, including Nederlands Dans Theatre, Hubbard Street Dance Chicago and Pacific Northwest Ballet.

Since 2009, Marshall has been a professor and the Director of Dance at Princeton University’s Lewis Center for the Arts.

Susan Marshall & Company has performed the work of Artistic Director/Choreographer Susan Marshall in theaters throughout the United States, Europe and Japan since 1985. The company has collaborated with Marshall on the creation and performance of works including Cloudless, Frame Dances, Play/Pause, Adamantine, The Most Dangerous Room in the House, Spectators at an Event, Fields of View, Arms, Interior with Seven Figures, and Kiss. Marshall, her artistic collaborators and company members have received a total of ten New York Dance and Performance Awards (BESSIES) for their artistic achievements. The company's work has been commissioned by Brooklyn Academy of Music (seven seasons), Peakperformances@Montclair, Jacob’s Pillow Dance Festival, Dance Theater Workshop, Krannert Center for the Arts, Walker Center for the Arts, On the Boards, Hanscher Auditorium at University of Iowa among others. International festivals at which the company has performed include the Edinburgh International Festival, International Festival of Arts and Ideas in New Haven, the Festival International de Nouvelle Danse in Montreal, Spoleto Festival, the Los Angeles Festival, Vienna Tanz, SpringDanse (The Netherlands), and NY City Center Fall for Dance Festival.

Sō Percussion has redefined the scope and role of the modern percussion ensemble, placing it at the leading edge of 21st-century music.

Their repertoire ranges from “classics” of the 20th century, by John Cage, Steve Reich, and Iannis Xenakis, et al, to commissioning and advocating works by contemporary composers such as David Lang, Steven Mackey, and Caroline Shaw, to distinctively modern collaborations with artists who work outside the classical concert hall, including Shara Nova, the choreographer Susan Marshall, Wilco’s Glenn Kotche, The National, Bryce Dessner, and many others.

Sō Percussion also composes and performs their own works – including From Out A Darker Sea and Amid the Noise – employing a distinctively 21st century synthesis of original music, artistic collaboration, theatrical production values and visual art, into a powerful exploration of their own unique and personal creative experiences.

In current season, Sō Percussion has premiered new percussion quartets by Vijay Iyer, Angélica Negrón, and Suzanne Farrin; performed at the National Gallery of Arts, Cal Performances, Stanford Live, and played Steve Reich’s Drumming for the Celebrity Series of Boston. In the summer of 2019, Sō performs the world premiere of Julia Wolfe’s latest piece at the LA Phil’s Noon to Midnight, and leads young composers and percussionists in the eleventh year of the Sō Percussion Summer Institute (SōSI). In 19/20, So will be presenting a massive retrospective of the past one hundred years of percussion music at Carnegie Hall in “A Percussion Century;” continuing collabora-tions (including a new album and more) with Caroline Shaw; performing David Lang’s man made and Lully’s Le Bourgeois gentilhomme with the Cincinnati Symphony, led by Louis Langrée; and performing in Glasgow, Paris, and throughout the US.

In 19/20 Sō Percussion celebrates its sixth year as the Edward T. Cone Ensemble-in-Residence at Princeton University.