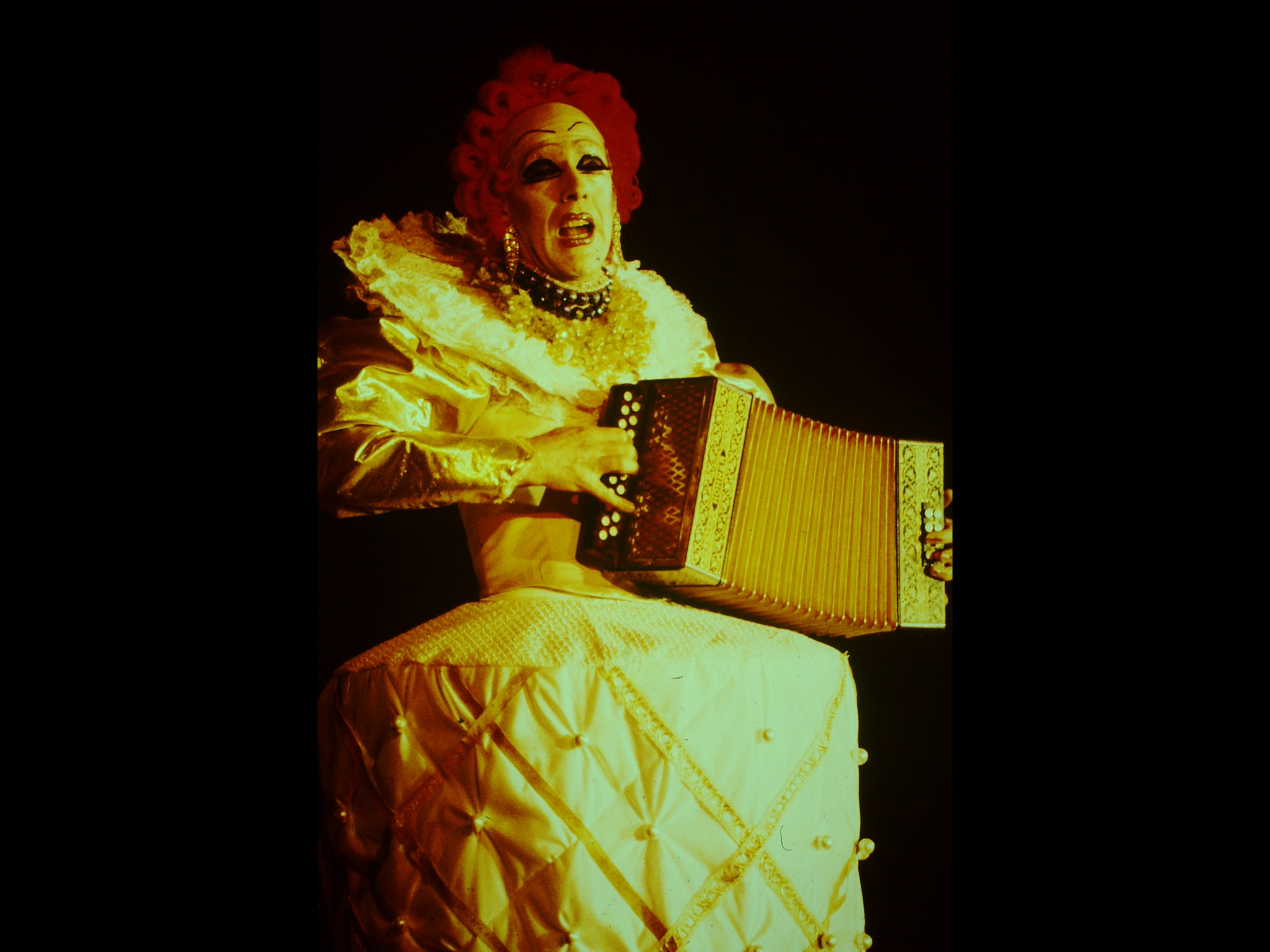 Originally shown on February 23, 2019, this program celebrates the life and work of Ethyl Eichelberger with panelists, live performances and archival materials!

Miss Joan Marie Moossy is a writer and an actress. Over the years, she has worked with many downtown luminaries like Ethyl Eichelberger, Gerard Little aka Mr Fashion, Black Eyed Susan, Penny Arcade, and Kevin Maloney, as well as producing her own work. She has been commissioned twice to write plays, once for the Tweed New Works Festival, and once for a private commission. She has also written magazine articles, had a radio show on WBAI, and a TV talk show on MNN. She makes short comedy movies and currently has a comedy detective series on YouTube called “Miss Moossy’s Neighborhood Mysteries” that is set on the Lower East Side. She worked with Ethyl for the last 4 years of his life. Miss Moossy started as his stage manager, then he went on to write parts for her in all of his subsequent plays. His mentoring was a huge influence and shaped much about Miss Moossy’s life. There is really no way to repay such a gift, but one of her missions since his death is to do everything she can to help keep Ethyl’s name and his genius alive.

Brian Belovitch has a storied career as a New York actor, writer and singer. He’s appeared on NYC stages for more than three decades. He was last seen as Alice, First Lady of Earth in Charles Ludlam’s, Conquest of the Universe or When Queens Collide at LaMama to commemorate the 50th Anniversary of the Ridiculous. A celebrated fixture on the New York 80's club scene as Tish Gervais, The Girl With Something Extra he dazzled the New York nightlife performing in the most exciting clubs of that decade, Limelight, Palladium, Danceteria, Area, Pyramid and the new Studio 54. As a playwright he was a 2000 GLAAD award nominee for his Off-Broadway autobiographical play: Boys Don’t Wear Lipstick. In 2016, Brian created Queer Stages an LGBTQ playreading group who's mission is to preserve and present LGBTQ themed plays and playwrights for current and future generations. On Sept. 25, 2018, Brian’s highly anticipated memoir, Trans Figured: My Journey from Boy to Girl to Woman to Man by Skyhorse Publishing in bookstores now.

Dynamic soprano Heather Green is thrilled to be Eichelbergling once again! Green’s most acclaimed role to date has been Richard Strauss’s Salome. In 2017, she debuted as Salome with West Bay Opera in Palo Alto, CA. Other favorite performances include the Wagnerian roles of Senta in Der fliegende Holländer and Sieglinde in Die Walküre, as well as Puccini’s La Fanciulla del West, and Lady MacBeth in Verdi’s MacBeth. Ms. Green also loves to collaborate with contemporary composers, having recently performed the New York debut of Luis Andrei Cobo’s “It’s About Time,” with the Composers Concordance in January 2019. In past seasons, she has performed the title role in the World Premiere of Patricia Burgess’ Yeshe, Queen of Tibet in Boudanath, Nepal; the World Premieres of Yoav Gal’s Mosheh (as Bitia) and 3weeks (as Aspasianus); and Thomas Carlo Bo’s Shadows of the City (as Lizzie). Hear Heather next with the Eclectic Music Extravaganza at Sowieso Neuköln in Berlin, Germany on March 1, 2019 at 8pm.

Jeremy X. Halpern is the creator of 1-800-Weirdos and host of "Weirdos.TV" (http://www.weirdos.com), and has masterminded such epic productions as "Battle of the Dead Celebs", and "Speak of the Devil - A Satanic Cabaret". He co-directed "Pretençión" at the Elektra Theatre, and served as the musical director for Chris Tanner's "The Etiquette of Death" (which closed LaMama's 50th season). He is also the executive producer of the mind-controlled levitation ride "The Ascent” (and the World's largest bio-feedback machine), with Emmy-award-winning production company Mindride (http://www.mindride.co).

Joe E. Jeffreys is a drag historian. He has published on the subject in encyclopedias, academic journals and book anthologies and featured in articles about the subject in media outlets including Time, The New York Times, Vice and Food and Wine. Jeffreys creates drag happy video works that have screened at museums and galleries worldwide including Howl! Happening, The Tate Modern and The Museum of Arts and Design. He teaches theatre studies at NYU and this semester at The New School is teaching a new class RuPaul's Drag Race and Its Impact.

John Kelly is a performance and visual artist.  He is currently working on ‘Underneath The Skin’, a dance theatre work based on the life and work of the novelist and tattoo artist Samuel Steward.  It will premier this October at The Skirball Center for the Performing Arts.

Jennifer Miller is the director and founder of Circus Amok – a one ring, no animal, free political,  circus extravaganza that has toured the parks of New Your annually since 1994.  She is the recipient an OBIE, a “Bessie”, and the 2008 Ethyl Eichelberger Award, along with numerous grants from the NEA, NYSCA, DCA, MAP, NYFA and others. Besides touring her own work internationally she performs with several choreographers and performance artists including Jennifer Monson and Vaginal Crème Davis.   She had a 10 year stint at Coney Island Sideshow by the Seashore.  She is a Professor of Performance at Pratt Institute

Mark Russell was the Executive Artistic Director of Performance Space 122, from 1983-2004, bringing the space from an artist rental space to a world renowned presenting institution committed to developing the work of New York City artists. Mark launched the Under the Radar Festival at St. Ann’s Warehouse in January 2005. UTR focuses on theater based contemporary performance. The festival moved to the Public Theater in 2006 and has become a centerpiece in the New York City theater season; mixing international performances with national and local artists. Russell has also served as the guest artistic director of the Portland Institute for Contemporary Art’s Time Based Arts Festival 2006-2008. He created the Off Center Festival for the Segerstrom Center for the Arts in Costa Mesa California, as well as the Off the Wall series at the Andy Warhol Museum in Pittsburgh, Pennsylvania. He served as an associate curator for the Act French Festival in New York in 2005. Russell has been involved with many artists over his career in dance, music, performance and theater, creating opportunities for them to reach wider audiences.

Lori E. Seid has worked in theatres, clubs and art spaces all over the world as a producer, stage manager, lighting designer and DJ since 1984. Seid has worked extensively with; DANCENOISE, Charles Atlas, Anohni, Split Britches, Karen Finley, Diamanda Galas, John Kelly, Meredith Monk, Blue Man Group, Ethyl Eichelberger, Boy George, Rosie O’Donnell and Cyndi Lauper (to name but a few). Seid is the recipient of The Obie, A Bessie, and The Theatre Craft International Award all for sustained achievement in theatre as well as several Daytime Television Emmy’s for Producing Music. She has been a Queer Political Activist since birth.