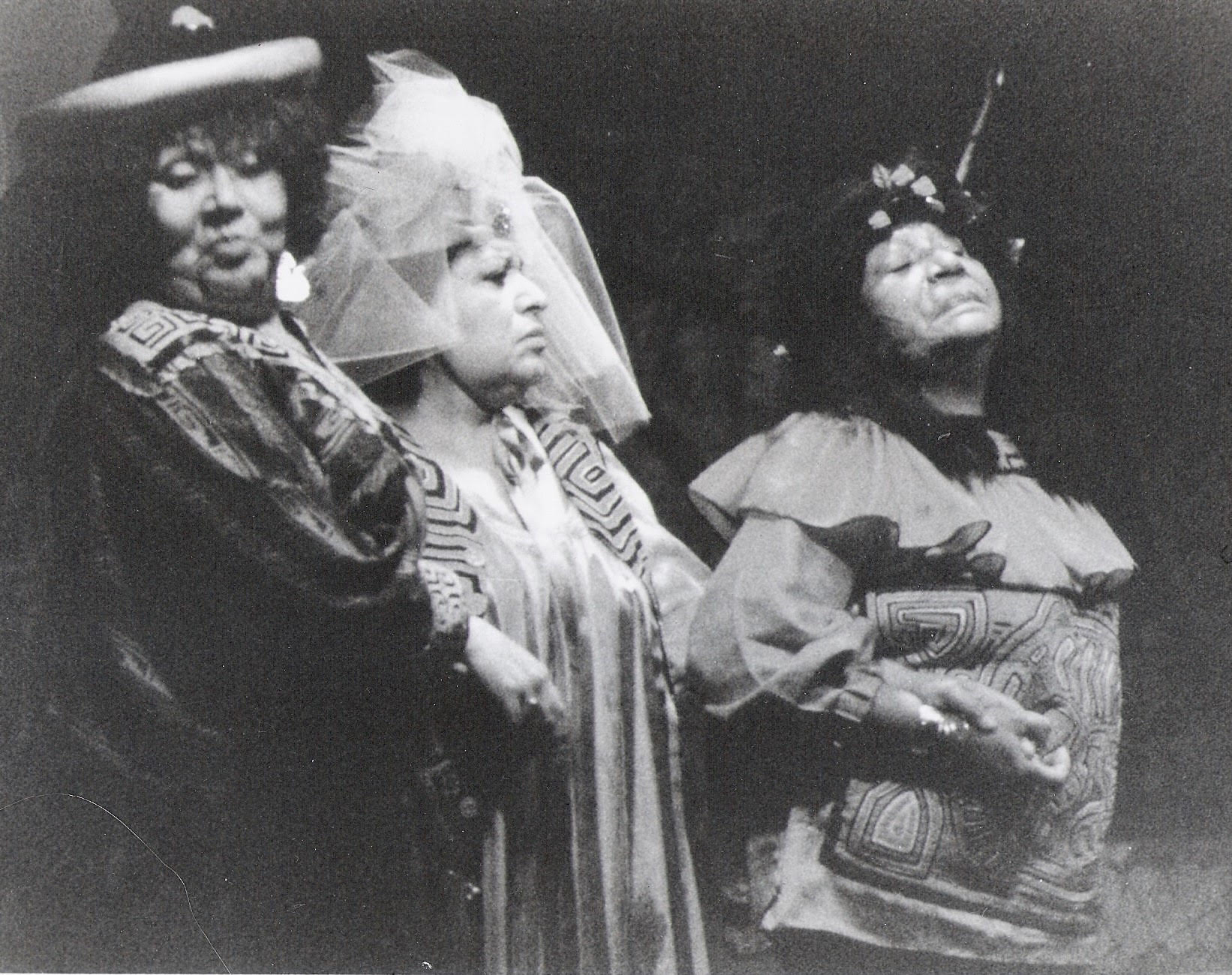 The event will be live-streamed on Howlround TV.

Curator, critic, playwright, activist Carey Lovelace has since 2019 led Visions2030, a movement-building platform dedicated to harnessing the artistic imagination to create new visions and models of society. Awarded a 2019 Visionary Pathmaker Award from the Bronx Museum of the Arts, since the 1980s, Carey has written about women and the art world, staging exhibitions focusing on early feminist art, particularly on collaborative art projects. She served as Co-Commissioner of the 2013 U.S. Pavilion of the Venice Biennale (Sarah Sze), earlier was co-President of the U.S. Division of the International Association of Art Critics; she has had over 50 productions of her own plays in the U.S. and the U.K. In 2009, Carey co-founded Loose Change Productions. Dedicated to transnational, transcultural theatre, the company incubates original projects by Native, Filipina, Indian, and Palestinian theatre makers; our company has collaborated with Spiderwoman Theater from our very founding.

Muriel Miguel (Kuna/Rappahannock) is the founder & Artistic Director of Spiderwoman Theater, the longest running Native feminist theater in the Americas. Miguel is an award-winning activist artist, director, choreographer, actor, and educator and has worked and toured extensively in the U.S., Canada, and across the globe for over 50 years. She developed “Storyweaving” Spiderwoman Theater's signature Indigenous performance methodology and is active in the training of Indigenous actors and
dancers in this culturally based method. Directorial credits include The Unnatural and Accidental Women - National Arts Centre in Ottawa; Fear of Oatmeal – American Indian Artists; Material Witness - Spiderwoman Theater. She is currently in development for Spiderwoman’s 2022 world premiere production of Misdemeanor Dream.
Miguel is a 2018 Doris Duke Artist and a 2016 John S. Guggenheim Fellow. She received an Honorary DFA from Miami University in Ohio and serves on the NYC Cultural Affairs Advisory Commission.

Gloria Miguel (Kuna/ Rappahannock) studied Drama at Oberlin College and is a founding member of Spiderwoman Theater. She has toured Europe, Australia, New
Zealand and to Beijing, China for the 4th World Woman’s Conference. She toured the United States in Grandma, a one woman show; toured Canada as Pelaija
Patchnose in the original Native Earth production of Tomson Highway’s The Rez Sisters and performed in Native Earth Performing Arts’ Son of Ayash in Toronto. She performed as Coyote/Ritalinc in Jessica, a Northern Lights Production in Edmonton, Canada and was nominated for a Sterling Award for best supporting actress.
She has created a one woman show, A Kuna Grows in Brooklyn. Recent acting credits include Chocolate Woman Dreams the Milky Way with her daughter, Monique Mojica; her one woman show, Something Old, Something New, Something Borrowed, Something Blue; Fear of Oatmeal at Theatre for the New City and Misdemeanor Dream. She has a DFA honorary degree from Miami University in Oxford, OH and is a lifetime member at the Lee Strasberg Institute. In 2017, she was named Indian of the Year by the Thunderbird American Indian Dancers, in 2019 received the West Beth Icon Award and in 2020 received the Clara Lemlich Award for social activism.

Lois Weaver is an artist, activist and Professor of Contemporary Performance Practice at Queen Mary, University of London. She was co-founder of Spiderwoman Theater, Split Britches, WOW Café Theater and Artistic Director of Gay Sweatshop in London. Lois is a 2014 Guggenheim Fellow and a Wellcome Trust Engaging Science Fellow for 2016-19. She was awarded the WOW Women in Creative Industries Award for Fighting the Good Fight in 2018. Her experiments in performance as a means of public engagement include the Long Table, the Porch Sitting, the Situation Room, the Care Café and her facilitating persona, Tammy WhyNot. Tammy collaborated with senior centres in NYC on What Tammy Needs To Know About Getting Old and Having Sex which premiered at La MaMa ETC, NYC in November 2014. Lois’s performance practice and history has been documented and illustrated in The Only Way Home Is Through The Show: Performance Works of Lois Weaver, eds. Lois Weaver and Jen Harvie, published in 2015 by Intellect and the Live Art Development Agency.

Peggy Shaw is a performer, writer, producer and teacher of writing and performance. She co-founded Split Britches and WOW Café Theater in NYC. She is a veteran of Hot Peaches and Spiderwoman Theater. She is a 2019 Guggenheim Fellow, a 2014 recipient of the Doris Duke Artist Award, and a 2016 recipient of the USA Artist Award. In 2017, Peggy was awarded an honorary doctorate from Queen Mary University of London for her contribution to theatre and the institution. Peggy has received three NYFA Fellowships and three OBIE Awards. She was the recipient of the 1995 Anderson Foundation Stonewall Award and Foundation for Contemporary Arts Theatre Performer of the Year Award in 2005. Her book A Menopausal Gentleman, edited by Jill Dolan and published by Michigan Press, won the 2012 Lambda Literary Award for LBGT Drama. Peggy was the 2011 recipient of the Ethyl Eichelberger Award for the creation of RUFF, a musical collaboration that explores her experiences of having a stroke.

Louis Mofsie is the Director of the Thunderbird American Indian Dancers and is a member of the Hopi and Winnebago tribes. He received his Master of Arts from Hofstra University and taught art for 35 years at the Meadowbrook School in East Meadow, New York. In addition to serving as the Artist-in-Residence at South Hampton College from 1972 to 1974, he has also led many Native American organizations, including the American Indian Counseling Center and the Indian League of the Americas. He has been the curator of exhibits at the Whitney Museum of American Art and the County Historical Society Museum in Bonneville, New York. He was the guest artist at the Walker At Center in Minneapolis with the American Indian Art, Form and Tradition exhibit, as well as showing his own work at the Philbrook Art Center in Tulsa, Oklahoma, the Woodards Museum in Gallup, New Mexico, and the Gallup Ceremonials, also in Gallup, New Mexico. Mr. Mofsie has fulfilled the role of Illustrator, in the books: The Hopi Way, Coyote Tales, and Teepee Tales; and of Choreographer, in the productions of Operation Sidewinder with the Lincoln Center Repertory Company, One Flew Over the Cuckoo's Nest with the Mercer Arts Center, Three Masked Dances with La MaMa ETC, and The Only Good Indian with the Theater for the New City. He has also made several recordings, including Songs and Dances of the American Indian, Authentic USA 1, and Traditional Native American Songs and Music by Mofsie. He has lectured and made appearances at the Museum of Natural History, the Metropolitan Museum of Art, Columbia University, Wesleyan University, and New York University, among other notable venues.

Paul Zimet (director) is the Artistic Director and a founding member of Talking Band. Wrote and directed, The City of No Illusions, The Room Sings, The Golden Toad (with Ellen Maddow), Marcellus Shale, New Islands Archipelago, Imminence, Belize, The Parrot, Star Messengers, Bitterroot, Party Time, Black Milk Quartet, and New Cities. Directed many new works for Talking Band including, Burnished by Grief (Ellen Maddow) and The Walk Across America for Mother Earth (Taylor Mac) and Part I of The Lily’s Revenge (Taylor Mac). Upcoming: Directing Lemon Girls or Art for the Artless at La MaMa. Obie award for direction, and three Obie awards for work with the Open Theater and Winter Project directed by Joseph Chaikin; The Frederick Loewe Award in Musical Theater; and a Playwrights’ Center National McKnight Fellowship; playwright alumnus of New Dramatists; Associate Professor Emeritus in Theatre, Smith College.

Ellen Maddow is a founding member of Talking Band. Plays she has written and composed music for include, Lemon Girls or Art for the Artless (premiering at La MaMa in March), Fusiform Gyrus - A Septet For Two Scientists andFive Horn, Fat Skirt Big Nozzle (with Louise Smith), Burnished by Grief, The Golden Toad (with Paul Zimet), The Peripherals, Panic! Euphoria! Blackout, Flip Side, Delicious Rivers, Painted Snake In A Painted Chair, and five pieces about the avant-garde housewife, Betty Suffer. She also composed the music for Talking Band’s production of The Room Sings and Marcellus Shale, Taylor Mac’s Walk Across American For Mother Earth, and Liz Duffy Adam’s Buccaneers (Children’s Theatre of Minneapolis) among others. Maddow received a Drama Desk Award for her performance in Clare Barron’s Dance Nation at Playwrights Horizons. Member of the Open Theatre, Obie Award for Playwriting, Frederick Loewe Award in Musical Theatre, McKnight and NYFA Playwriting Fellowships, NEA/TCG Award for Playwrights, alumnus of New Dramatists.