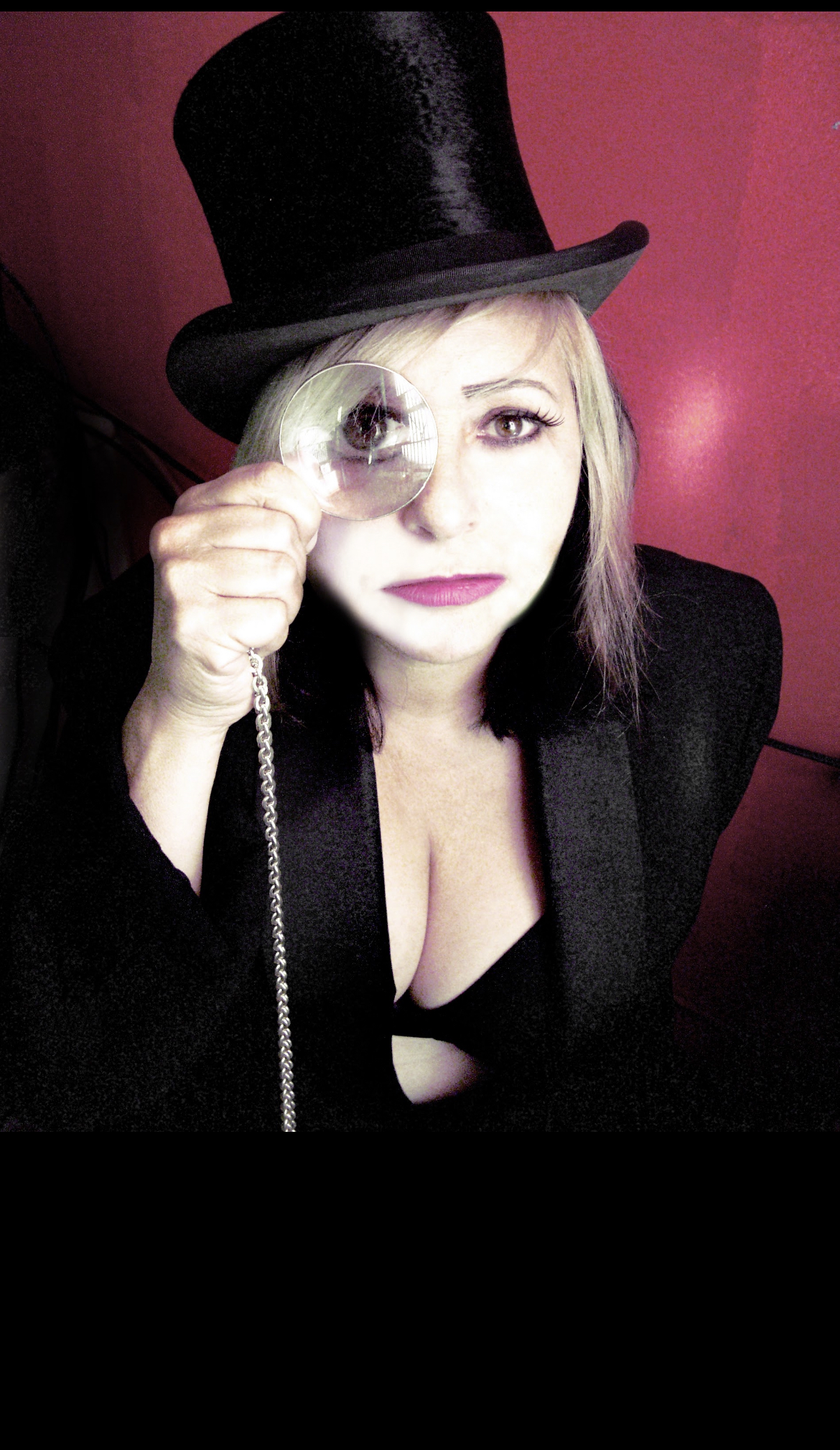 Penny Arcade aka Susana Ventura is an internationally respected performance artist, writer, poet, and experimental theatre maker known for her magnetic stage presence, take no prisoners approach, her content rich plays and one liners. She is the author of 16 scripted performance plays and hundreds of performance art pieces. Her work has always focused on the other and the outsider, giving voice to those marginalized by society. Her willingness to speak truth to power at the expense of career concerns has made her an international icon of artistic resistance.

Sarah Schulman is a novelist, playwright, screenwriter and nonfiction writer. She has been making art and enjoying art in the East Village since 1979 and has been enriched by Penny’s work for decades.

Steve Zehentner is a designer, co-director and dramaturge who for over 30-years has collaborated with Penny Arcade on dozens of shows and over a thousand performances. Together they helm The Lower East Side Biography Project. His independent video projects have been presented on public television and are in the collections of universities and museums.

Danny Fields was born and raised in New York City, where he lives. After attending the University of Pennsylvania, and Harvard Law School, he returned to New York, where he became: Managing Editor of Datebook Magazine; Editor of Hullaballoo Magazine; Editor of “16” Magazine; Publicity Director of Elektra Records; columnist for the Soho Weekly News and other publications; artists’ manager (Lou Reed [for two weeks], Iggy Pop, the Ramones), freelance writer and photographer. His archives have been acquired by Yale University; and My Ramones, his book of photographs of the band, with commentary, was published by First Third Books [London].

Tony Zanetta has been fortunate to work with many acclaimed Artists.  He has performed in new plays by Andy Warhol, Jackie Curtis, Wayne/Jayne County. Anthony Ingrassia. Ken Bernard, Roslyn Drexler, William Hoffman, Linda Mussmann and  most recently, Tabboo!   In the 70’s he travelled the World, tour Managing ZIGGY STARDUST and producing Bowie’s DIAMOND DOGS.  Later he focussed on Staging, Set design and Art direction collaborationg with Emilio Cubeiro, Annie Sprinkle, Cherry Vanilla, Yello, Man2Man, Dianne Brill and Ms. Penny Arcade.  He was present for Penny’s first forays into creating her own work and was privileged to be a part of those early pieces.  SID AND NANCY at the Chelsea remains one of his favorites as well as TRUE STORIES at PS122.  Bravo, Penny! And thank you giving us  a lifetime of original and exciting Theatre!!

Heather Woodbury is a writer-performer known for her live serials that combine the high-wire immediacy of solo performance with the scope of a novel. Critically distinguished in the NY Times, the Chicago Sun-Times and on NPR, she takes the pulse of people living their lives in the crosshairs of history. In addition to numerous stage productions in the US and Europe, her works are published as novels by Farrar, Straus & Giroux, and Semiotext(e), and broadcast as podcasts & radio plays. In April of 2020, 91 performing artists and activists from cities spanning the U.S. and UK took part in a live-on-Zoom interpretation of Heather’s 12 episode serial AS THE GLOBE WARMS, and raised donations and action for Extinction Rebellion International and a dozen local pandemic relief funds. She’s currently prospecting a new terrain she posits as fansite fiction, about women reading novels and watching television and the ways that the female erotic imaginarium collectively intersects with history, both personal and epochal.

Lee Raines is an HIV positive playwright living in the East Village. He has choreographed/collaborated with Penny Arcade on several shows for over two decades, including Based on A True Story, Bitch! Dyke! Faghag! Whore!, Bad Reputation and New York Values.

Jennifer Belle is the bestselling author of four novels— Going Down (named best debut novel by New York Magazine), High Maintenance, Little Stalker, and The Seven Year Bitch. Her life changed when she met Penny Arcade in 1989 and played Young Penny in “Bad Reputation,”  “Based on a True Story,” and “La Miseria.”

Karen Malpede is playwright of 22 plays on ecofeminist and bearing witness themes. She directs her own work in collaboration with her partner, the actor/producer, George Bartenieff, and they are cofounders of Theater Three Collaborative. Most recent: Blue Valiant (Farm Arts Collective 2021, also the film version available on YouTube and as part of the Segal Theatre Center International Film & Theatre Festival, March 2022); the cli-fi, Other Than We (La Mama 2019, recorded online for Columbia Earth Institute 2020); Extreme Whether (Theater for the New City 2014; Paris-ArtCop21 2015; La Mama 2018), Another Life, surreal expose of the US torture program (Gerald W. Lynch Theatre, 2011, Irondale, 2012, Theater for the New City, RADA Festival of New Plays, 2013).Troy Too, her verse play about BLM, Covid and Climate, is the only American play in Staging 21st Century Tragedies (Routledge, 2022). She is author of the anthology Plays in Time: The Beekeeper’s Daughter, Prophecy, Another Life Extreme Whether (Intellect, 2017), lead editor of Acts of War: Iraq & Afghanistan in Seven Plays, (Northwestern University Press, 2011) and creator of two earlier, notable, anthologies, Women in Theater: Compassion and Hope and People’s Theater in America. Her recent plays are published by Laertes Books/Egret Editions. McKnight National Playwrights Fellow. She has taught at Smith College, New York University and is currently on the Environmental Justice and Theater faculties at John Jay College, CUNY.

Ken "Angel" Davis has worked on almost all of Penny's shows beginning w/ La Miseria B.D.F.W., Bad Reputation, N.Y.Values and Sissy Sings The Blues for the Vienna Festwoken. As a dancer he has toured w/Penny all over the globe ,Edinburgh,Vienna, Munich, Berlin, Zurich, Galway, Dublin, Cork, Sydney, Melbourne, Adelaid, as well as her sold out run at the legendary"Village Gate". He has worked in "Downtown" theater with Annie Sprinkle,Linda Simpson, Betty Bourne/Ray Dobbins, Mary Fulham and others. "I went on tour w/Penny Arcade and survived."

﻿David Pace-Moon is a Graphic Designer/Artist/Actor/Flanneur etc. living and working in New York City. He often exclaims, to anyone who would hear..."I came to New York to meet people like Penny Arcade...and I did!"

James Nicola has been the Artistic Director of New York Theater Workshop for more than thirty years.  Prior to NYTW, he served at Arena Stage, New York Shakespeare Festival and TCG. As a director, his work was sometimes seen at the WPA Theater, and but mostly he spent many hours libating with the legendary, inspiring community of downtown artists at Phebe’s.

Chris Kraus is the author of four novels, three books of art and cultural criticism, and a literary biography of Kathy Acker.  Her first novel, I Love Dick, was adapted for television. Kraus is a former Guggenheim Fellow and a co-editor of the independent press Semiotexte. She’s been a Penny Arcade fan since 1984.