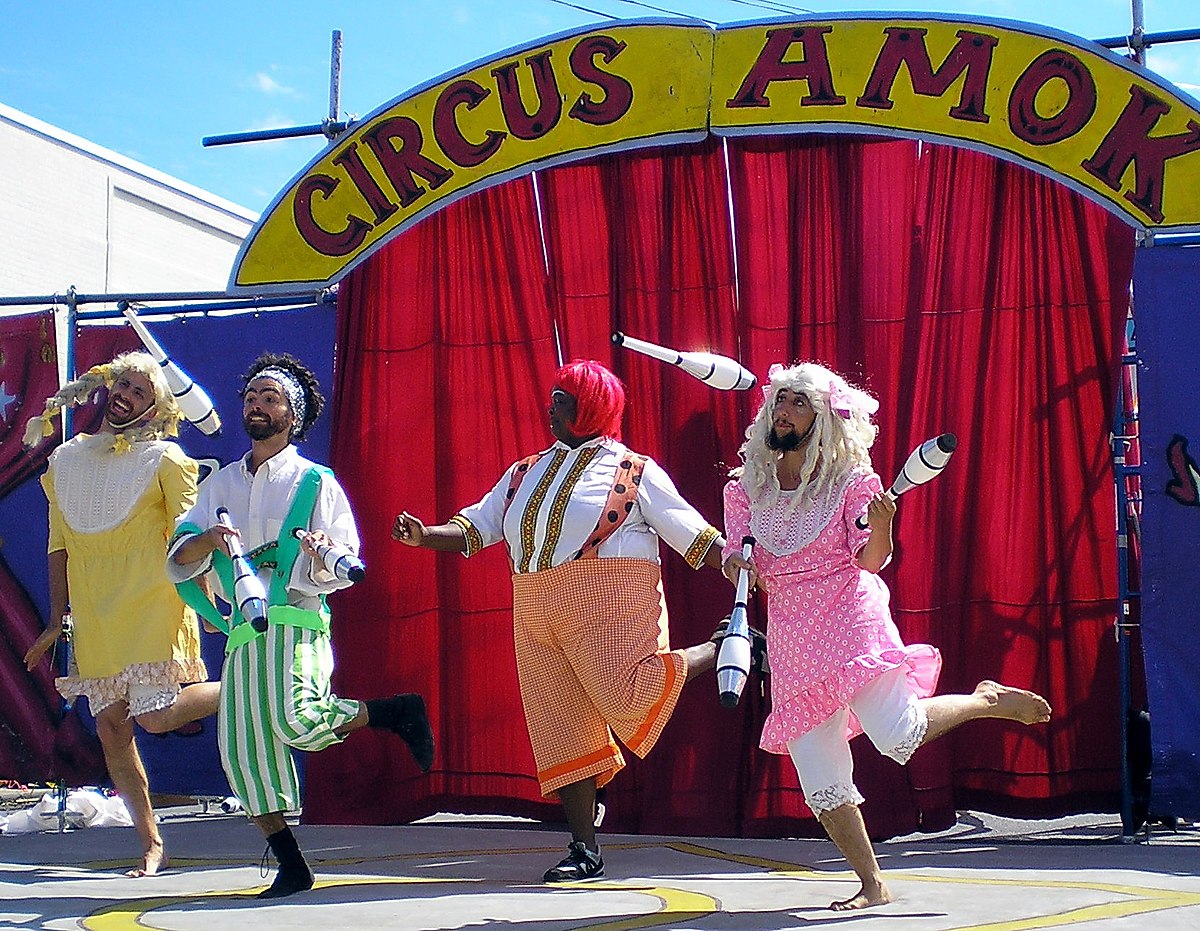 Circus Amok is a New York City based circus-theater company whose mission is to provide free public art addressing contemporary issues of social justice to the people of New York City.

Directed and founded by Jennifer Miller, the group has been together since 1989, bringing its funny, queer, caustic and sexy, political, one-ring spectacles to diverse neighborhoods throughout the city. Traditional circus skills — tight rope walking, juggling, acrobatics, stilt walking, clowning — are combined with experimental dance, lifesize puppetry, music old and new, gender-bending performance art and improvisational techniques, creating new meanings for circus while continuing to entertain crowds of all ages throughout the city streets, gardens, parks, and playgrounds.

Circus Amok invites the audience to envision a more empowered life of community interaction while enjoying a queer celebratory spectacle.

Laura Helton is a historian, documentarian, and archivist who, once upon a time, also wrote grants, sewed sequins, and wrangled puppets for Circus Amok.

Jennifer Miller is the director and founder of Circus Amok—a one ring, no animal, queer as fuck, free circus extravaganza that has been touring the parks of New York annually since 1994. She is the writer and director of Cracked Ice and The Golden Racket.  Besides touring solo shows internationally she works with a myriad of  choreographers and performance artists including Jennifer Monson and Vaginal Crème Davis. She is the recipient of an OBIE, a “Bessie”, and an Ethyl Eichelberger Award.  She had a 10 year stint at Coney Island Sideshow by the Seashore and is a Professor of Performance at Pratt Institute.

A native Kentuckian, Cathy Weis performed with the Louisville Ballet from 1961 to 1966.  Subsequently she tap danced on the streets of San Francisco and did a stint as a disco queen before coming East where she received an MFA, a Bessie Award and a Guggenheim Fellowship among other honors. Along with her own work, she has performed with Circus Amok since 1993. She lives and works in NYC and East Charleston, Vt.

Sarah East Johnson has been Amok-ing around since 1989. She is also the founder of LAVA, feminist acrobatic dance since 2000.

Mary Feaster (Bassist, Circus Amok Band) has been paying bass in various bands/projects in NYC for many years. Current music projects include CHRISTEENE and Machine Dazzle, each of which released albums this past year. Working with Circus Amok has been one of the most inspiring and joyous projects I have had the pleasure of being part of, and hope to continue!

Ben Meyers is a graduate of the Bindlestiff Family Cirkus and Hungry March Band School of Honk, and has been playing trombone with Circus Amok since 1999. He enjoyed a life of applied bohemianism until becoming a lawyer in 2012, and now works in protest law and parole support.