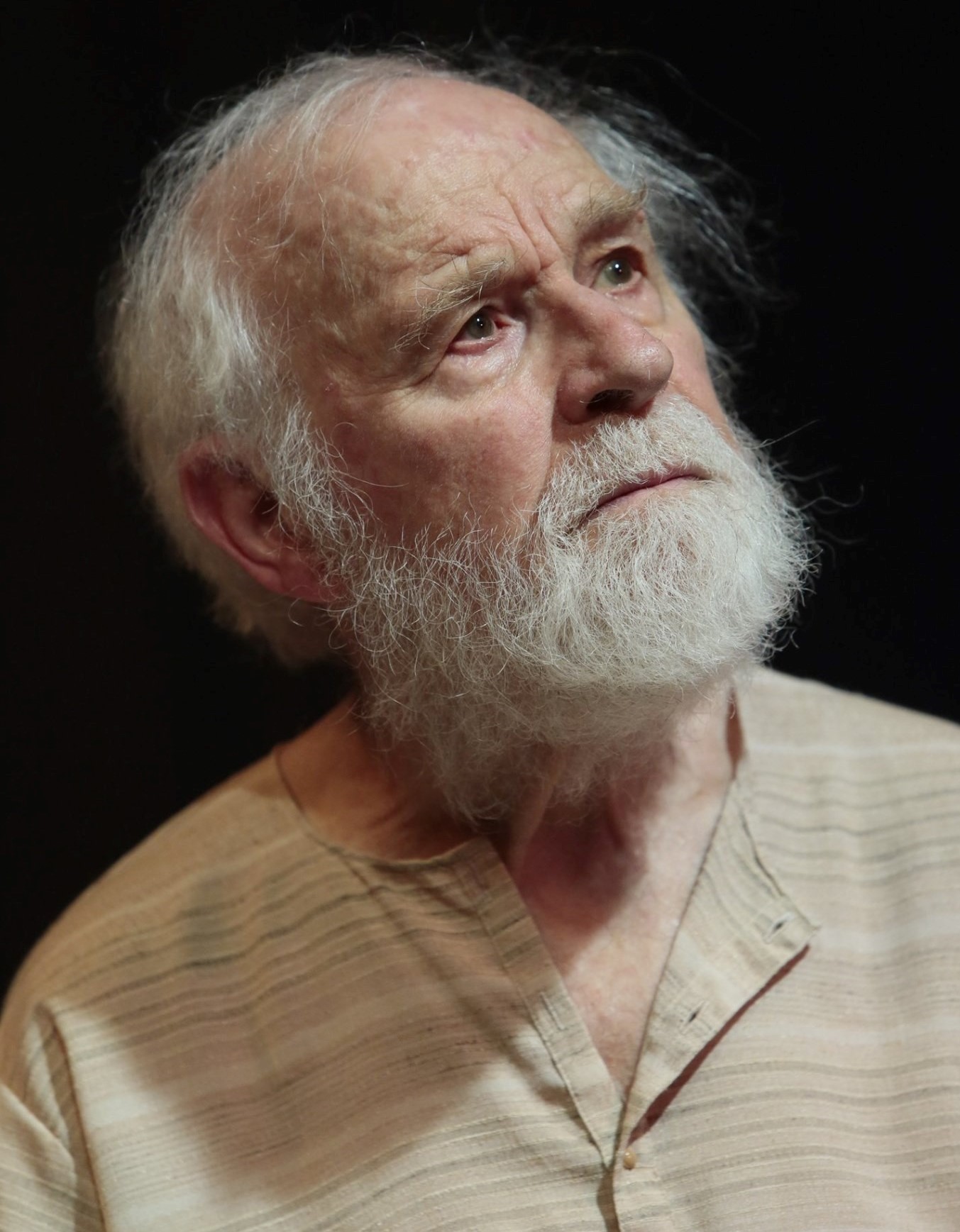 La MaMa will be celebrating the life of George Bartenieff.

We will show clips from George's final performance Blue Valiant, a film of an outdoor performance with Kathleen Chalfant and Millie Ortiz, music by Arthur Rosen, written and directed by Karen Malpede, and clips from his Obie-winning Victor Klemerper in I Will Bear Witness from the Dresden performance, alongside photos of George in many plays during his storied career. There will be readings from his Brig Log, a chronicle of the Living Theater's 1963 production of The Brig and from the memoir he was writing shortly before he died of his childhood in Nazi Germany. We will also show excerpts from Penny Arcade's interview with George at the LES Biography Project, photographed and edited by Steve Zehentner, and excerpts from George's farewell, photographed by Michal Gamily and edited by Halleli Gamily Peleg.

George Bartenieff was born in Berlin in 1933 into a family of dancers, and immigrated to the United States in 1939. As a child, he studied at Maria Ley Piscator’s childrens’ wing of the Dramatic Workshop, established by her husband, Irwin Piscator. There he was in two plays with Judith Malina, who would co-found The Living Theatre. He began his professional acting career on Broadway at age 14 in 1947, in The Whole World Over, directed by Harold Clurman and starring Uta Hagen and Herbert Berghof.  He was on Broadway again two years later in Lillian Hellman’s Montserrat, a metaphor for the McCarthy Hearings, directed by Hellman. He graduated from RADA and The Guild Hall in London, in acting, but while a student in London, he also directed several well-reviewed plays, including Samson Agonistes by John Milton. When he returned to New York, he began to act regularly at Judson’s Poets Theater, while balancing a commercial career. He played Krapp in Krapp’s Last Tape, and Peter in Edward Albee’s Zoo Story for six months, directed by Allan Schneider. Bartenieff co-founded Theater for the New City with Crystal Field, where he produced over 400 new American plays, including the Pulitzer Prize winning Buried Child by Sam Shepard and seven plays by Irene Fornes. He also co-founded the Greenwich Halloween Parade, and produced four Eco-Festivals at TNC and with six other theaters nationwide. In 1987, Judith Malina directed Karen Malpede’s Us, starring Bartenieff, at Theater for the New City. Malpede and Bartenieff have worked together ever since, co-founding with the late Lee Nagrin, the Obie-winning Theater Three Collaborative in 1995. Bartenieff and Malpede produced, with Bartenieff acting major roles in, Malpede’s poetic, social justice plays on themes ranging from Bosnia and rape in war (The Beekeeper’s Daughter), the Iraq war (Prophecy), U.S. torture program (Another Life) to climate change (Extreme Whether) and to utopian visions for a species (Other Than We), their last production before the pandemic, in November 2019. They co-adapted I Will Bear Witness: the Holocaust Diaries of Victor Klemperer, which toured Europe and U.S. for four years. Their work has premiered in New York (Theater for the New City, La MaMa, NYTW, Classic Stage, Irondale, Gerald W. Lynch Theater), and has been staged in London, Paris, Berlin, Prishtina, Kosovo, and Veroli, Italy. Blue Valiant, a play about a grieving horse, was written for Bartenieff and Kathleen Chalfant. Blue Valiant, with an original piano score by Arthur Rosen, premiered at Farm Arts Collective in May, 2021; the film of this production is now streaming on YouTube.  Bartenieff also acted major roles with Bread & Puppet Theater, Mabou Mines, The Public Theater and Shakespeare in the Park, and many regional theaters. He was on Broadway as the Rabbi in Harvey Fierstein’s Fiddler on the Roof, and with Al Pacino in Richard II. He taught acting and play making at HB Studios. Bartenieff is winner of four Obie-awards for Acting and Sustained Excellence in Theater, and for producing, and a Drama Desk Award. Bartenieff’s great love was socially transformative, poetic language theater. George Bartenieff died on July 30, 2022, with his collaborator/wife Karen Malpede at his side, in his Brooklyn home.

Cindy Rosenthal is Professor of Drama at Hofstra University and a performer and director. Her essays on George Bartenieff and Karen Malpede have been published in The New York Times, Women and Performance, TheTheatreTimes.com and Plays in Time, an anthology devoted to Malpede's work. Rosenthal's books include Restaging the Sixties: Radical Theatres and their Legacies, Modern American Drama: Playwriting 2000-2009 and Ellen Stewart Presents: Fifty Years of La MaMa Experimental Theatre, which received the George Freedley Memorial Award. She is honored to be back at La MaMa, celebrating the brilliant legacy of George Bartenieff.

Karen Malpede is the author/director of 22 ecofeminist plays, produced in the United States, Europe, and Australia and translated into French and German. Malpede is the co-founder with George Bartenieff, of the Obie-winning Theater Three Collaborative. Another Life, a surreal look at the U.S. torture program, workshopped in Kosovo, premiered on the 10th anniversary of the September 11, 2001 attacks, at the Gerald W. Lynch Theater, was staged in two subsequent New York productions, and then in London, 2011–14. Her play Extreme Whether, premiered at Theater for the New City in 2014, was staged in French and English as part of ARTCOP15, at the UN Climate Conference in Paris, 2015, and in Copenhagen, then in revival at La MaMa Experimental Theater Club, 2018. Other Than We premiered at La MaMa in 2019 and is available as a recorded reading at the Columbia Earth Institute. She is also the author of numerous essays on theater, ecology, and politics, as well as short fiction, and short plays published nationally and internationally. Dinner During Yemen, produced at the Signature Theater, as part of Imagine: Yemen, 2018, is published online by The Kenyon Review and anthologized in She Persisted; Troy Too, about Covid, Climate Change and Black Lives Matter, is anthologized in Staging Twenty-first Century Tragedies. She is the editor and contributing author of seven books, including Plays in Time: The Beekeeper’s Daughter, Prophecy, Another Life, Extreme Whether; Acts of War: Iraq & Afghanistan in Seven Plays; Women in Theater: Compassion & Hope. She is on the Theater and the Environmental Justice faculties at John Jay College, CUNY. She is a McKnight National Playwrights Fellow, and a recipient of a New York Foundation on the Arts playwriting award.

JoAnne Akalaitis is a Lithuanian American theatre director and writer and cofounder of Mabou Mines. Among works she directed are Endgame, The Balcony (by Jean Genet) and The Birthday Party (by Harold Pinter) – she has staged works by Euripides, Shakespeare, Strindberg, Schiller, Tennessee Williams, Philip Glass, Janáček, and her own work at the Lincoln Center for the Performing Arts, NewYork City Opera, Goodman Theatre, Hartford Stage, Mark Taper Forum, CourtTheatre, Opera Theatre of Saint Louis, and the Guthrie Theater. She is the former artistic director of the New York Shakespeare Festival and of the Public Theater, and was artist-in-residence at the Court Theatre in Chicago. Ms. Akalaitis was the Andrew Mellon co-chair of the Directing Program at Juilliard School, and was the Wallace Benjamin Flint and L. May Hawver Flint Professor of Theater at Bard College until 2012. She is the recipient of a Guggenheim Fellowship, National Endowment for the Arts grants, Edwin Booth Award, Rosamund Gilder Award for Outstanding Achievement in Theatre, and Pew Charitable Trusts National Theatre Artist Residency Program grant.

Christen Clifford is a multidisciplinary feminist artist, writer, curator, actor, filmmaker, and mother. As an actor, she performed in the plays of Karen Malpede with George Bartenieff at TNC, the Dionsyia festival in Italy, Lee Nagrin’s theatre, John Jay Theatre, RADA, and the Irondale. Clifford’s first risograph artbook, BabyLove, was acquired by The Watson Library at The Met. Awards and fellowships from: Women Make Movies, NYFA, NYSCA, Creative Catalyst, and NYC Artists Corps. Her work has been written about in ARTFORUM, artNews, ArtNet, Hyperallergic, NYLON, and Dazed. She teaches at The New School and curates at Dixon Place. Her studio is at Project for Empty Space in Newark and she lives in Queens and online @cd_clifford

Tommie J. Moore is the Founder of "Dare to be Black."  Through theater and film,  this company educates and protects the legacies of African-American Icons.  Mr. Moore is a writer, director and an actor who has performed in over 30 plays.  He graduated with a B.A. in Theater Arts/Communications. His film work includes; Robinson (rookie FBI agent) in the feature film "Al Qarem," Larry in the web series "LabCats," Abraham in the film "The Lure"  and Dr. Mali in the Innovating Microsoft Volumetric Film "Fly Angel Soul" being released in 2023.  In November 2019, Mr. Moore originated the character Tenaka in Karen Malpede's production of "Other Than We." In this production,  he was honored to grace the stage alongside George.  Mr. Moore was also Blessed to originate the role of Bass Reeves, in the "2019 National Black Theater Festival's" number one play "Cowboy." Mr. Moore is well-known for writing and starring in his Regional one-man play "Dare to be Black: The Jack Johnson Story." And has most recently, written an one-woman production titled "Queen Bess," a play about Bessie Coleman. Mr. Moore is dedicated to writing stage plays and screenplays focusing on African American History and/or God's Goodness. Please visit Daretobeblack.com