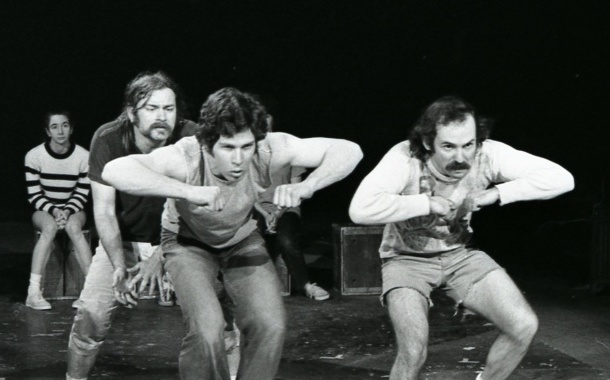 AND MORE TO BE ANNOUNCED!

JOEL ZWICK directed My Big Fat Greek Wedding, the highest-grossing romantic comedy of all time. Recent films include Fat Albert and Elvis Has Left the Building. Mr. Zwick directed the Broadway production of George Gershwin Alone at the Helen Hayes Theatre.  He began his theatrical career at La Mama E.T.C., as director of the La Mama Plexus and has directed on Broadway, Off-Broadway and Broadway touring companies. He and Hershey Felder have collaborated on Monsieur Chopin, Beethoven As I Knew Him and Maestro.  Currently, Mr. Zwick is recognized as one of Hollywood’s most prolific directors of episodic television, having the direction of over 650 episodes to his credit. New York productions have included Dance with Me (Tony nomination), Shenandoah (Broadway national tour), Oklahoma (national tour) and Cold Storage (American Place Theater). He acted in the original New York production of MacBird. He directed Esther (Promenade Theater, NY), Merry-Go-Round (Chicago and Las Vegas), Last Chance Saloon and Woycek (West End). Mr. Zwick has taught drama at Yale University, Brooklyn College, Queens College, Wheaton College, and the University of Southern California. He is a graduate (B.A., M.A.) of Brooklyn College.

JUDY ALLEN was a member of LaMaMa Plexus from 1969 to 1973, performing in Spring Voices (1969), Dance Wi’ Me (1971-72) and The Myths of America Smith (1973). She has also performed in regional theatre, summer stock and off- & off-off-Broadway. With Hudson Valley’s Blue Horse Rep Theatre Co. she has been in A Christmas Carol,Dancing at Lughnasa, Spoon River Anthology, In The Dead End and most recently; A Perfect Analysis Given by a Parrot by Tennessee Williams. Other favorite roles include Sister Mary Ignatius, Grandmain The American Dream and Mother of the Bridein Plaza Suite. Living in Putnam Valley, NY since 1980, Judy is the founder and artistic director of Apple Tree Productions, a local theatre company. She co-founded and is on the Board of Tompkins Corners Cultural Center (www.tompkinscorners.org), and is its Theatre Director.

ANNABEL LEVENTON  is an actor, singer, writer, coach. A professional actor since 1966, with Cafe La Mama's Plexus company in 1968. Nominated Actress of the Year for Hair! in London 1968, she has appeared many times in London's West End, as well as in countless television shows and films. A Transylvanian in The Rocky Horror Picture Show, comedy in Jeffrey Bernard is Unwell with Peter O’Toole, Sir Andrew Aguecheek for the Royal Shakespeare Company, a dyke chicken in Olivier-award-winning musical Honk! at the National Theatre, she founded the seventies three-girl group Rock Bottom, on which the groundbreaking TV series Rock Follies was based. Her recent memoir The Real Rock Follies charts how she challenged a major television company over the theft of her idea. The test case in the High Court established the law on Intellectual Property in the UK.
She remembers her time in New York with so much affection and love and learned so much there.

ANDY ROBINSON As an actor and director I’ve done all kinds of work on stage, film and TV for over 50 years. I graduated from the New School for Social Research and trained at the London Academy of Music and Dramatic Art on a Fulbright scholarship. Worked regional, off-Broadway, Broadway theatre, and most important, off-off Broadway, primarily at La Mama Plexus as one of the founding members where Ellen Stewart established Plexus as the first teaching and producing company in this country based on the revolutionary physical theatre work of Jerzy Grotowski and Eugenio Barba. This work later became the core component when I created an actor-training MFA program at the University of Southern California, a program I ran and taught in for 14 years. I am a Professor Emeritus of Theatre Practice at USC and occasionally still do physical theatre workshops. I have also been a founding member of the Antaeus Classic Theatre Company and the Matrix Theatre Company where I was co-artistic director for 10 years. I have appeared in numerous films (DIRTY HARRY, HELLRAISER) and TV (LIBERACE, DEEP SPACE NINE), and directed episodes of Star Trek shows and “Judging Amy.” I have directed and acted in over 100 theatre pieces, most recently THE $5 SHAKESPEARE COMPANY directed by Joel Zwick, reuniting for the first time since La Mama 50 years before.