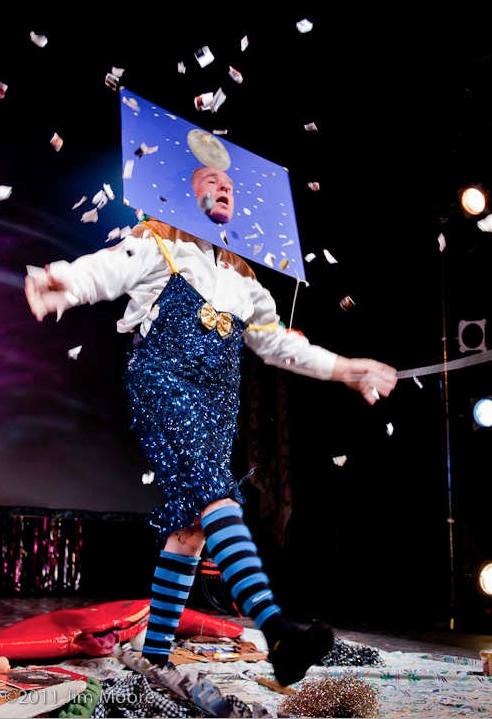 Tom Murrin (1939–2012) was best known as a pioneering performance artist of the East Village scene, turning trash into treasure in his uniquely entertaining shows. But he began as one of the first generation of La MaMa playwrights and continued to write and present plays throughout his life. His influence on generations of artists spanning theater, performance art, and dance was profound and continues today.

Arriving in New York in the mid-1960s, Tom Murrin (aka Alien Comic, aka Jack Bump) became a member of the first generation of La MaMa playwrights. He wrote four plays performed at La MaMa and produced by John Vacarro’s Playhouse of the Ridiculous, including the offbeat hitCock-Strong, which toured with Ellen Stewart’s La MaMa troupe to Paris, Amsterdam, and Brussels.

In the 1970s, Murrin moved to Seattle and joined Alex Souldancer’s Para-Troupe, which created happenings and street performances. He and fellow performer Johanna Went then went east and began to perform what they called “trash theater,” which entailed using objects found on the street in wild shows. They were featured in The NY Drama Review in 1976. After performing street theater around the world, Murrin returned to New York in 1978 where he took up residence at director Bill Hart’s Razor Gallery. Under the guidance of famed rock manager Jane Friedman (Patti Smith, Lenny Kaye, John Cale) Murrin began to perform under the name Alien Comic, opening for acclaimed punk bands in rock clubs such as CBGB and Max’s Kansas City. In the mid-1980s, he created, performed, and curated a series of variety nights at Performance Space 122 called The Full Moon Show. Artists whom he presented in these shows included DANCENOISE, Jo Andres, Mimi Goese, Steve Buscemi (performing as “Steve and Mark”), David Cale, Ethyl Eichelberger, The Blue Man Group, John Kelly, and Karen Finley.

Murrin wrote for Paper magazine covering theater and performance for 16 years, and served on PS 122’s Avant Garde A Rama curating committee for 25 years, helping to introduce hundreds of new artists to the venue. Under the direction of head curator Salley May, Murrin performed in introductions to nearly 30 Avant Garde A Rama evenings at PS 122.

His plays Sport-Fuckers and Butt-Crack Bingo were produced at Theater for the New City and La MaMa, and directed by David Levine. In 2010 he wrote and performed The Talking Show, The Magical Ridiculous Journey of Alien Comic, directed by Lucy Sexton. It was presented at PS 122 in New York and The Steve Allen Theater in Los Angeles.