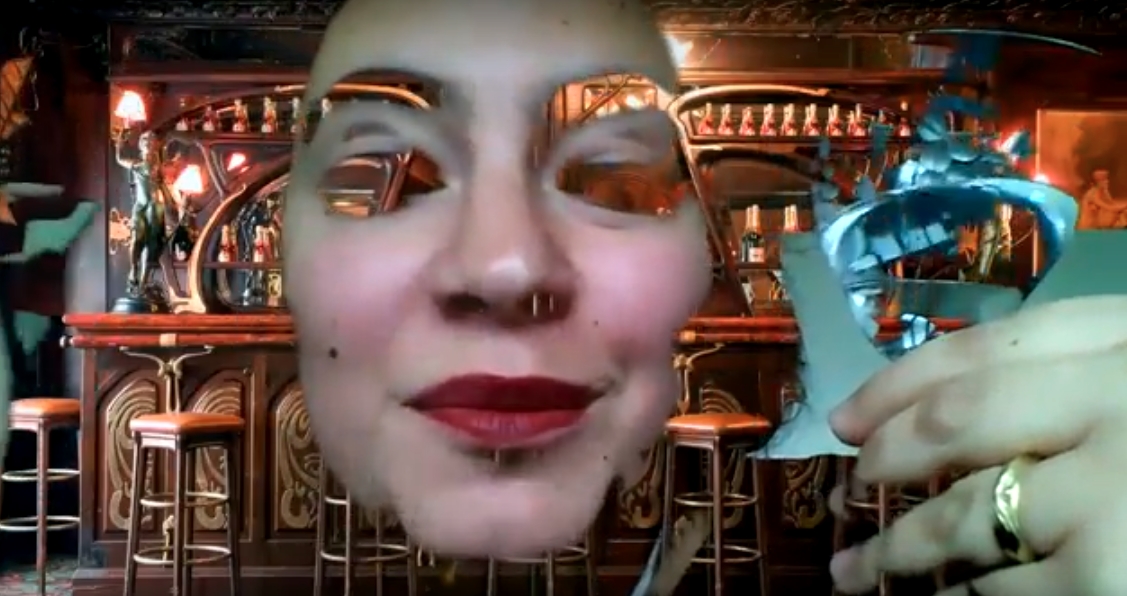 Window Projection & Performance, Co-Presented by La MaMa & Goethe Institut New York
The premiere of this event will be accompanied by a performance-panel with Adham Hafez and guests, beginning at 5:30pm EST

Cairo KitKat Club is an experimental digital performance and installation work by the HaRaKa Platform (Adham Hafez, Mona Gamil Lamia Gouda, Adam Kucharski), in partnership with artists and specialists from New York, Berlin, Cairo, and London. The project retells the history of cabaret and clandestine performance through the story of Egypt’s KitKat Club, an infamous cabaret established in the 18th century and demolished in the 20th century, that has witnessed radical performance practices by artists from Egypt, Germany, the US and France set against a backdrop of colonialist conquests, urban decay and revolutionary hope. The project shuttles between the past, and the present moment, reflecting on the future of performance in a world shaped by borders, pandemics and financial collapse.

Living at a time when we are made to stay distant from one another because of a global pandemic, where intimacy means infection, and public conviviality causes contagion, this project looks back at assemblies of pleasure and politics that took place between Cairo, Berlin, and New York embodied in the history of the infamous nightclub, The KitKat. Built almost 100 years before Berlin’s KitKat Club of the 1990’s, Cairo’s KitKat was a radical cabaret by the Nile that saw constellations of artists, politicians, spies, and societal figures at the end of the 19th century and the beginning of the 20th. Stories at the KitKat were shaped by major world events, from the Spanish Flu pandemic, the shutting down of theatres, to WWI and WWII. '

This project, screened on a projector in the front window of the Goethe-Institut New York, weaves stories from the Isherwood’s American imagination of Germany, and Hollywood's depiction of Weimar cabarets in the 1972 film Cabaret (also taking place at a ‘KitKat Club’), going all the way back to the bellydancing, microtonal singing and glamorous houseboats in Cairo. Anita Berber, Josephine Baker, Hekmat Fahmy, Adolf Hitler, Hans Eppler, Anwar Sadat, Laszlo Almasy, Samia Gamal, Cecile B. DeMille, and Amina Mohammed are some characters that stride reality and fiction in ways akin to the performances of nationhood perpetuated by governments at times of cultural wars. The project is based on research conducted in Berlin, Cairo, London and New York, with MI5 files that have been recently declassified by the British Intelligence, oral histories from the KitKat neighborhood in Cairo, and chronicles of intergenerational clubbing within Cairo, New York and Berlin’s nightlife as we continue to live through a world of no theatres, cabarets or clubs today.

Project of HaRaKa Platform, in partnership with and supported by Goethe-Institut New York, and Co-presented by La MaMa, and further supported by the Hilal Foundation The project is developed through Cairo Critical Cabaret , a performance lab initiated by HaRaKa Platform, experimenting with the form and history of cabaret, staging multiple artistic objects, processes and interventions.

HaRaKa Platform was established in 2006 by a group of artists, theorists and specialists initially based in Cairo and working from Berlin, New York City, and Cairo since 2011. HaRaKa is the first platform dedicated to performance studies and movement research in Egypt, and through local, regional and international partnerships it has curated, produced, published, researched and set up pedagogic programs in the Arab world, Europe and the US. Its latest projects were presented at Sharjah Architecture Triennial (UAE), La Mama Theatre (US), Hebbel Am Ufer (Germany), among others. The platform focuses on colonial histories in relation to body-based practices, gender in performance, the Anthropocene and its cultural implications, as well as new planetary paradigms. It is steered by its core members, Mona Gamil, Lamia Gouda, Adam Kucharski and Adham Hafez. Over the past fifteen years HaRaKa has created collaborations with renowned artists including Cristina Caprioli (Stockholm), Constanza Macras (Berlin), Mey Seifan (Damascus/ Berlin), Yoshiko Chuma (New York), Myriam Van Imschoot (Brussels). HaRaKa stages performances, publishes and translates texts on choreography and theatre, and has curated several international festivals and exchange platforms in Egypt, the US and Germany specializing in contemporary Arab performance practices and diasporic communities.

Adham Hafez is a Berlin and New York based choreographer, sound artist, theorist and performer. Recipient of multiple awards including First Prize for Choreography by Cairo Opera House, Adham Hafez was recently described by the New Yorker as 'an intellectual magpie whose text-heavy works bristle with political ideas'. He studied science, choreography, political science and performance studies in Amsterdam, Paris and New York. Adham Hafez is the founder of HaRaKa Platform and is the principal choreographer associated with its work.