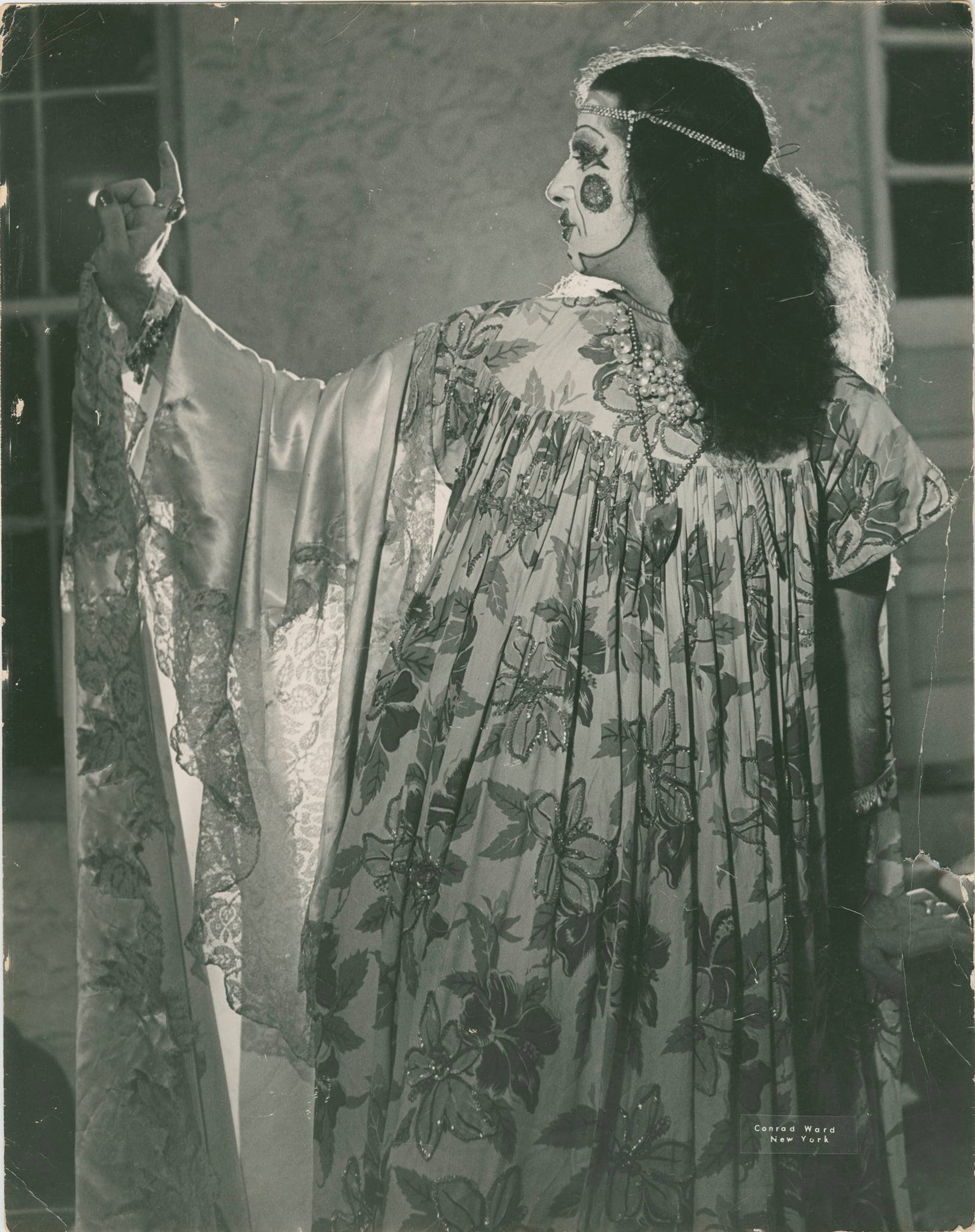 Services for Michael will be held at

Michael Arian wrote the following about Ellen Stewart in 2019:

Summer of 1970 after traveling with La Mama’s Arden of Favorsham Co. through Italy and Yugoslavia I went to Amsterdam and along with Lamar Alford we started La Mama Amsterdam. Lamar wanted to stay in Europe and so did I, so with Ellen’s blessing and help, we decided we would bring the style and technique we’d learned at La Mama, NYC to Holland and hopefully have a good time. So we workshopped and worked-out and worked hard then put on quite a few different productions. Mostly of things we’d seen or done in NY. So with a few tweaks here and there and some Dutch language inserted we were able to re-create the plays and make them new and all our own.

Ellen called me to say that the Playhouse of the Ridiculous was coming over to tour with it’s creator and director John Vaccaro at the wheel and did I want to stay and work with them, so seeing a golden opportunity to stay and get paid to tour around I said yes. After all, who ever had producer problems or got abandoned mid-tour in Europe???

They all arrived at Central Station, Amsterdam on Valentines Day 1971. Marie Antoinette Ruta our full-blooded Mescalero Apache was the first off the train greeting me and calling me by someone else’s name. Good to be remembered.

The plan was to stay and cast the show and rehearse in town then go out and live on a beautiful farm/theater called the Mickery run by Ellen’s friend Ritzart ten Cata. So, like other La Mama companies before us, we’d perform at the farm then go touring from this home base (also Lamar and I had found places for these people to stay before the farm and we did a good job so they all had homes and a few had new lovers).

John had decided to revive Cock-Strong and Heaven Grand in Amber Orbit. I hadn’t been in either one in New York but had seen them both and seeing Heaven Grand in 1969 was the reason I wanted to work with this group in the first place. Since Lamar and I knew most of the “talent pool” in A’dam the show was cast and songs distributed. John must have thought I was the only singer, because he gave me most of the songs in Cock-Strong. In Heaven Grand I got what was to become a part I did for a year all over Europe and in a bicentennial revival in 1976 at La Mama. I played a ‘mongoloid idiot’ as described by Jackie Curtis the author.

When I saw the La Mama production of Cock-Strong in 1969 the policy allowed us to attend every performance. So after we bought the first ticket for $2 we went to every night using the ticket stub to enter, even bringing umbrellas for a not to be believed grand finale. We also brought a gallon jug of red wine every night and it was always a good time. The order of events in the show always seemed out of order but I thought it was the wine. Legend was that Vaccaro wrote the number of each scene on a sheet of paper then tore the paper into strips and drew them from a hat to establish the running order of the show. Thus having an autopsy on the title character before his wedding and an operation after his funeral. So, I would start the evening as God singing in a sparkly gold tunic my long curly hair used to it’s best advantage. Next becoming some kind of feather hatted fop singing about having a chicken on the subway crapping in my face. Then I was a cheerleader in the autopsy scene cheering for the cast to ”give me a big (letter) P” etc. spelling out psynosis or whatever gibberish letters I felt like yelling R H B O Q Q S before singing about the glory of living a natural life.Then at the end of the the show all dressed as American Indians for the Kama Sutra ballet/sex dance before the big finale and after running around in circles underneath a Cock stage set we chanted ’come come come come’ and it would. Ergo the umbrella, like when we first saw the show performed in NYC.

Ellen supervised the initial “cockstruction”. I never figured how she knew where to get a 15 foot zipper in Amsterdam but she did.Under her direction we built a 15 foot long totally collapsable and portable penis out of chicken-wire, with a giant eyeball on the business end that pointed at the audience. A garden hose was threaded through it and connected to a sink somewhere backstage. It rained and rained, except for that one time later in Brussels.

Our first shows were in Basil, Switzerland where we were in a newly opened ‘state of the art’ performance space, they had at least a dozen men for load-in and the place was set up so our bus could drive on stage to unload. Then after a run that left the Basilites open-mouthed we returned to Holland for several dates then to Paris to the Cite Universite where we lived in dorms on the campus for a month, arriving right in the middle of crazy student unrest and rioting. We got very unfriendly reviews on campus and very unfriendly treatment from angry French students. Calling us something untranslatable in French, something anti-American. We ate in the student cafeteria and the staff loved us not letting us order the tripe even though we didn’t know what it was and they couldn’t explain it in English, using mime to get the point across. The audiences loved us and we had a lot of returns and happy fans. We went to discos nightly. We met Pat Cleveland and some other models who were just becoming famous we also met a not yet discovered Jessica Lange. Jim Morrison died while we were there. Our stage manager, Kenny Hill, was friends with Thierry Muggler who became a fan and came to see us many times bringing great groups of beautiful chic French people. He too was about to gain great fame but in the meantime he became a friend and we even went button shopping to the Flea Market when he next came to Holland.

We headed back to Amsterdam and home base before we left for a gig in Brussels. We couldn’t make the driver get near the giant Atomium landmark image of the 1958 World’s Fair. We had to settle for a glimpse of it. The show was very well received and once again screams and ovations and lots of fans. Night before closing we were invited to city hall for a big reception with the mayor and bunches of local officials and flash bulbs and the star treatment. We all took turns sitting behind the mayor’s desk banging his gavel and him sitting with the pretty girls on his lap leering at them. We were toasted with champaign and ate little dainties and a good time was had by all.

Then bright and early the next morning we were awakened by loud banging on our doors and screams of Poletzi and 'ofen de doeur' (in Flemish or Dutch??). I most certainly was groggy but had the presence of mind to pitch my stash of hashish out the window. All our rooms were around a courtyard and every one of us had the same thought at the same time and chunks of hash went flying out the windows like it was a hail-storm.

We were taken to jail and threatened with arrest if we didn’t point out who the culprits were in a stack of the best pictures ever taken of the show. It was a funny losing fight for the police because we all had on very heavy white-face and glitter in the photos and none of our passport names were the same as in the program so we weren’t about to help. We had Reginald Rimmingtongue, Marsha Dimes, Helena Hallway, Kennita Mountain. I was the only one using my real name but the fuzz didn’t notice. We tried stealing the photos but didn’t manage and ended up dragging our tired asses to the theater for closing night. We learned the police had confiscated the cock and refused to return it. The place was like a bee hive of activity. Ellen had shown up from who knew where and hearing what had happened she had rallied the artistic community to re-build the cock. It got done and come curtain time, wet paint and all and including about 100 extra people in the house and in the aisles the curtain went up.

The one lasting issue was John was declared a criminal and would be arrested if he tried to re-enter Belgium. His crime was corrupting the public morals and obscenity.

Ellen was the hero of the evening recreating the cock she had made so long before, creating the hero image I saw from then on. 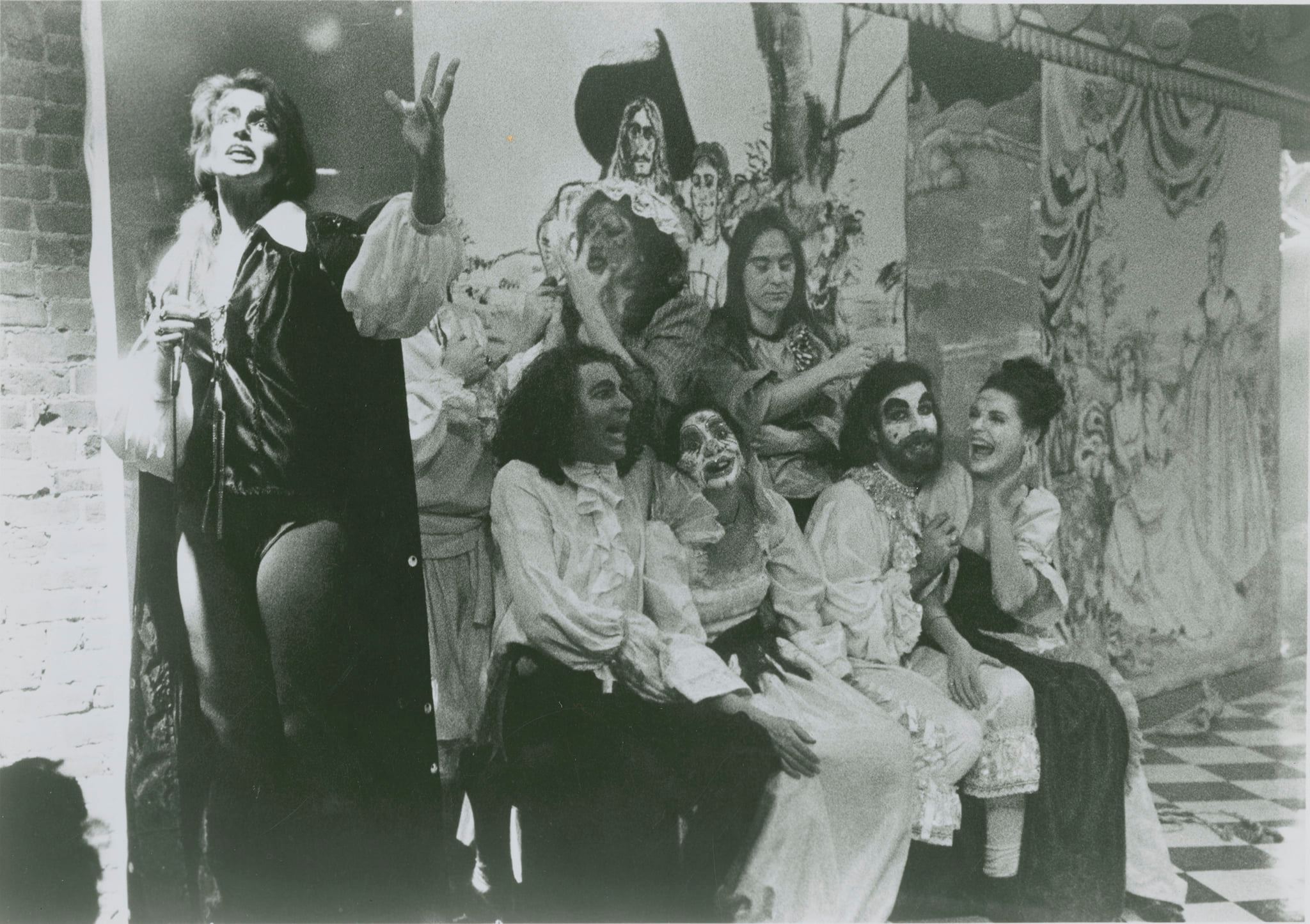 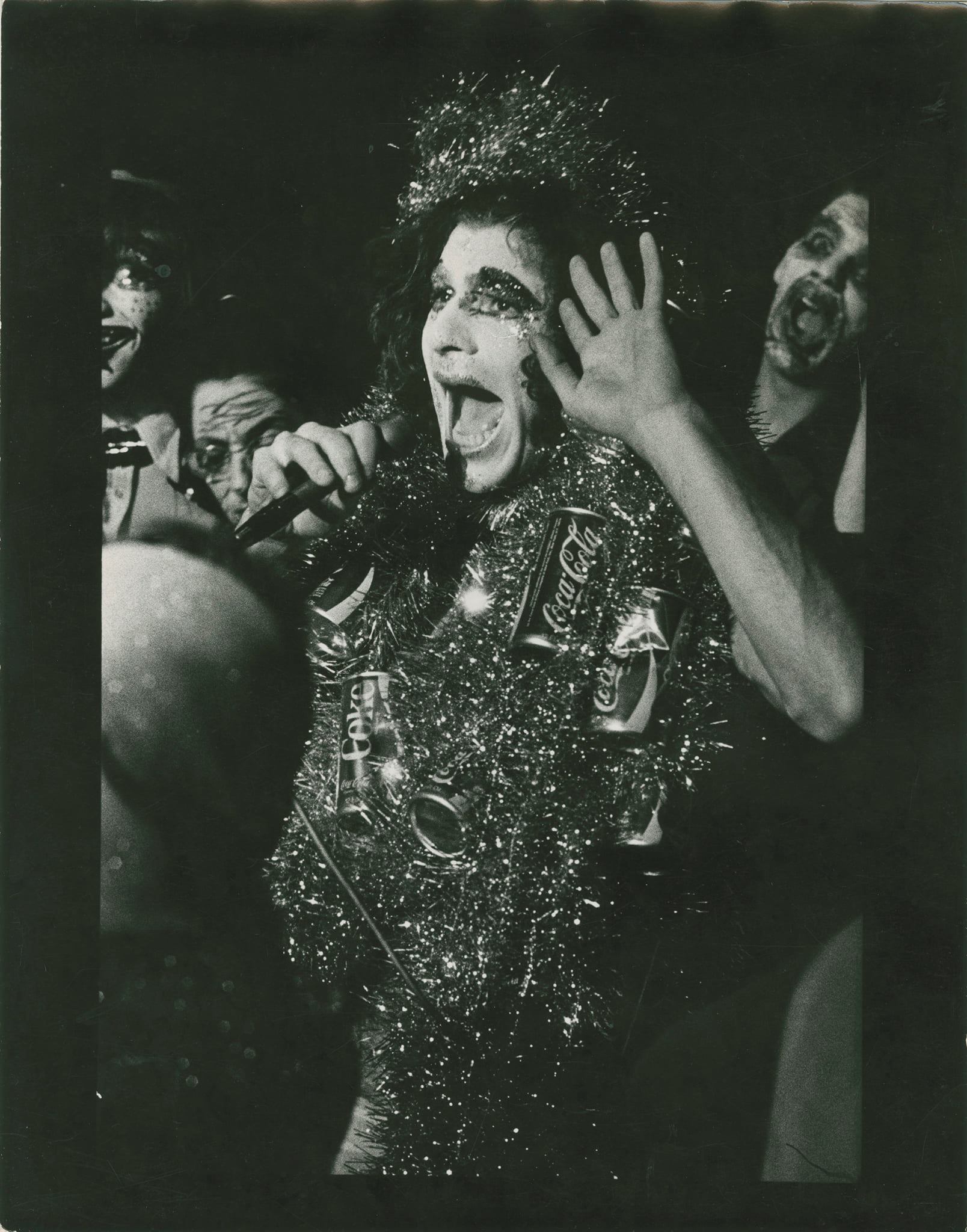 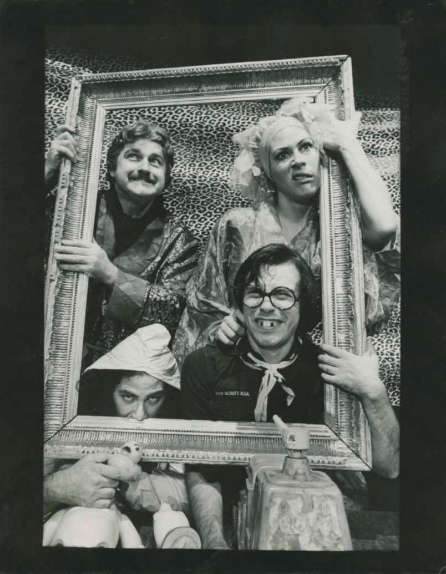 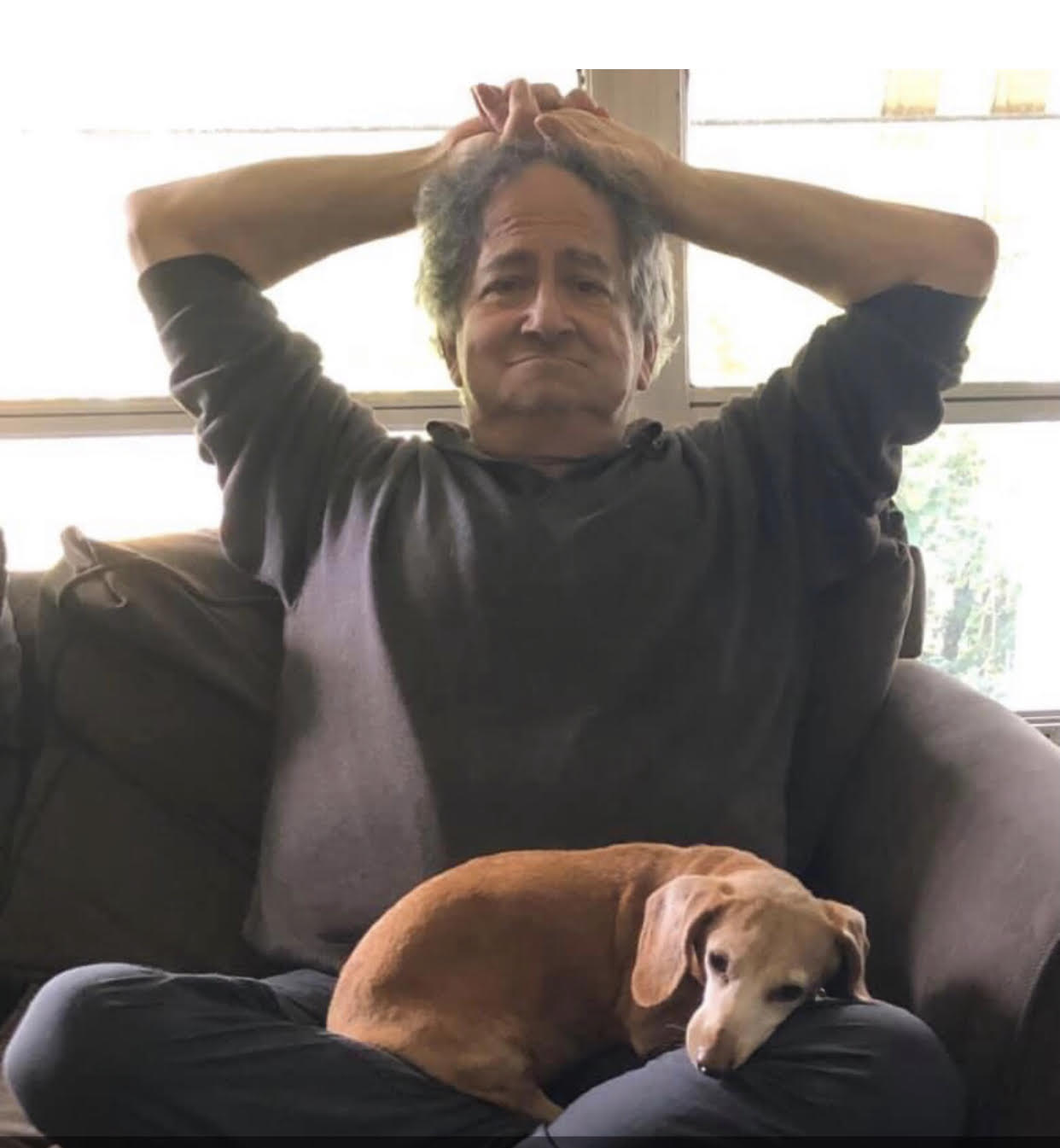 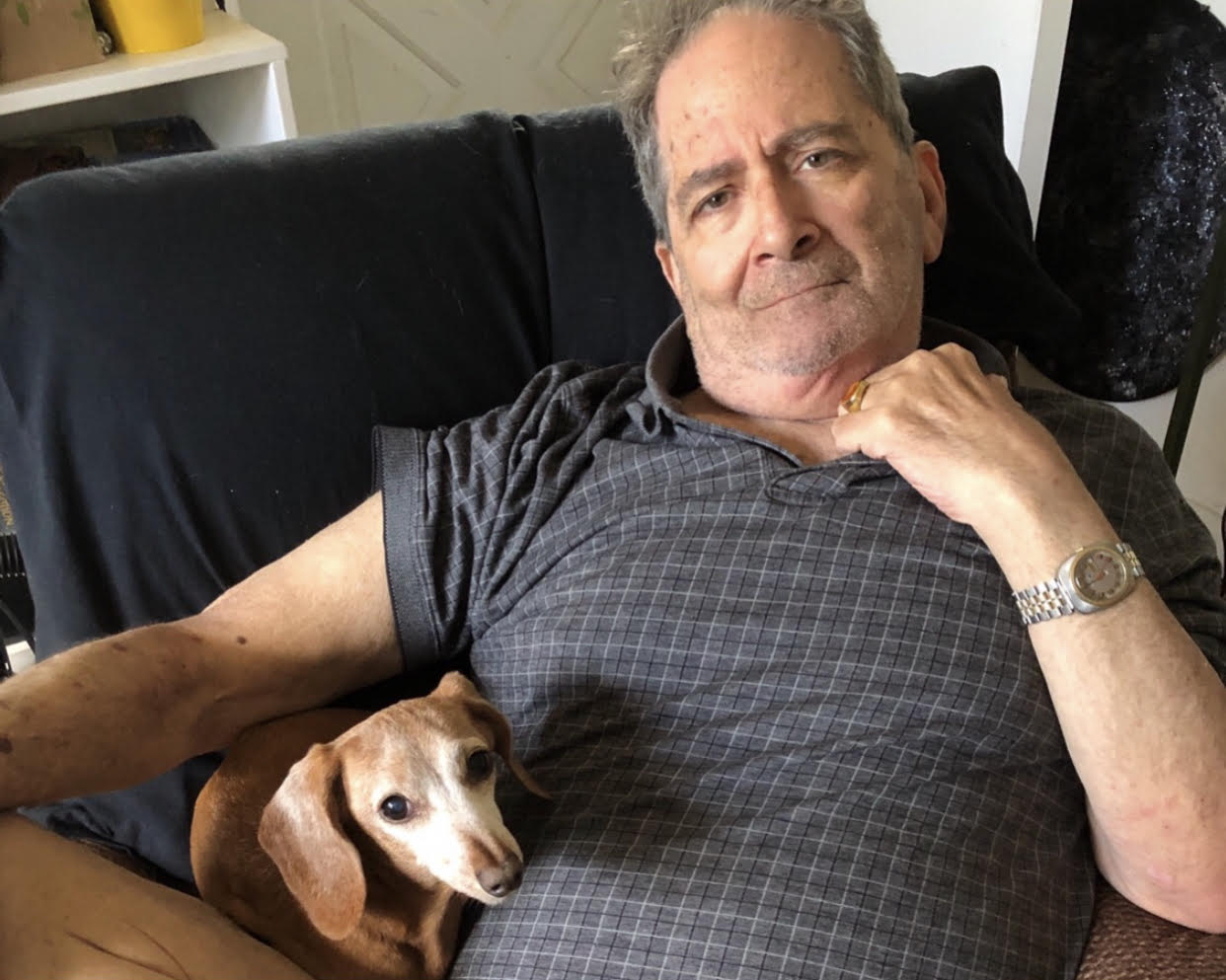