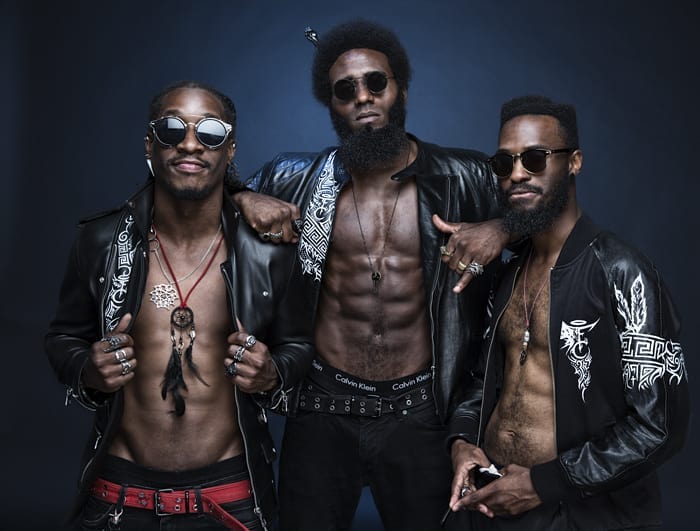 Brian Henry, also know as HallowDreamz, is a Brooklyn Buck/Krump dancer from Bed-Stuy Brooklyn NY who was known for his audition on SO YOU THINK YOU CAN DANCE (season 8). He calls his personal Krump style BROOKLYN BUCK. Brian started Krumping in 2004. Inspired by Mijo and Tight Eyez "The creators", Brian has been pushing the Krump movement in N.Y.C. since 2008, when he joined E.S.K. (East Street Kingdom, a branch of the group STREET KINGDOM founded by Tight Eyez. Brian has taught at EXPG, Broadway Dance Center, PMT, and many more. Recently featured in Madonna's music video "Bitch, I'm Madonna and A$Ap Ferg & Liam Bailey's "Villain". Brian also has experience in Ballet, Modern, contemporary, and African. Which makes him one of the most sought after Krump teacher.

Rocka Jamez: Born & raised in Crown Heights Brooklyn NY. Professional Dancer who specializes free form contemporary infused with the studies of KRUMP. He’s also a designer in the fields of Urban Fashion & NYFW. Playing a big role as a Street Dance Community Leader, he created a Dance platform that unites all Dance Cultures, called “Roundz Of Flame”. He participated in multiple NYFW events and achieved dance awards, features in The New York Times, VOGUE magazine and sponsorship by PUMA. Rocka was also honored to perform a dance piece for Rihanna at Parsons School Of Design | The New School Awards (2017) | with his brothers (Dance Trio) “The NUU Knynez”. As a person who likes to inspire the children, Rocka taught dance to the youth abroad, in places like Bali, Indonesia, Africa, Sweden & Berlin, Germany just to name a few. His goal is to open Schools that specializes in all of the different street dance styles, fundamentals and history.

Twice Light was born in the Bronx and raised throughout Brooklyn. He is a founding member of dance trio, The Nuu Knynez. He has shared the Webster Hall stage with Michael Jackson and has performed on the Apollo Theater stage, winning 1st place at Amateur Night with The Nuu Knynez. His dance style is ELEMENTAL: Infusing The Elements Of Earth, Wind, Fire, Water. Through his craft, he hopes to inspire others in and out of the field to live the higher version of themselves in the skin they were born in. He aims to allow his dance to stay truthful to the source of light.